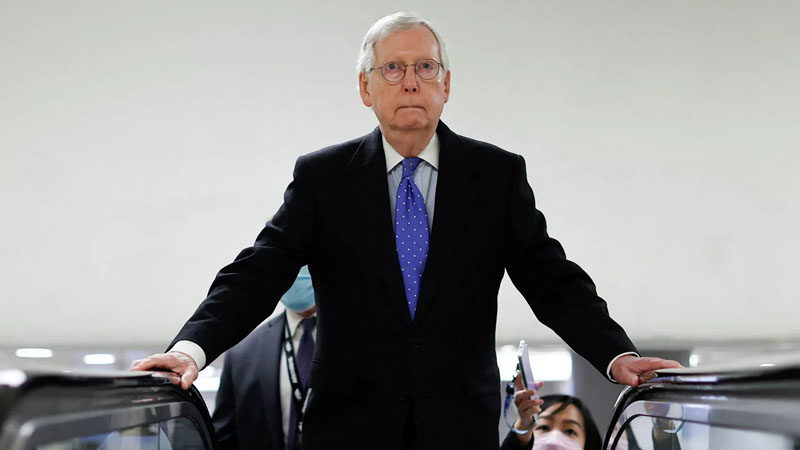 US ьedia have been speculating about an alleged rivalry between the two heavyweights of Republican politics – the former president and the Florida governor – who are considered the GOP favorites in the 2024 election.

Despite both former President Donald Trump and Sunshine State Gov. Ron DeSantis denying any friction between them and blaming “the media” for making a fuss, Trump advisers believe there is a hidden hand at work, NBC News reported Tuesday.

According to the report, Senate Minority Leader Mitch McConnell, R-Kentucky, who is locked in a battle with Trump over the Republican Party’s future in congressional races across the country, could be responsible for the recent media frenzy.

Last week, when DeSantis appeared on the popular political podcast “Ruthless,” he apparently slammed the COVID-19 lockdowns that Trump pushed during the coronavirus outbreak in early 2020. And prior to that, Trump had appeared to take a shot at DeSantis just days before, labeling lawmakers who refuse to declare their vaccination status “gutless.”

NBC sources cited DeSantis’ remarks on the Ruthless podcast, which is co-hosted by McConnell’s longtime adviser Josh Holmes, as evidence for their theory. Shortly after the podcast was released on Friday, reports appeared that DeSantis had slammed Trump by claiming one of his biggest regrets was not being “louder” about the risks of the virus-slowing lockdowns.

“I like Josh. Josh is great. But he’s a wholly-owned subsidiary of McConnell World. And there’s no way you can tell me that this was all a coincidence,” an unknown top Trump adviser is quoted in the report as saying. “Also, DeSantis and his staff knew what they were doing. How many Florida general election voters are listening to the Ruthless podcast?”

According to the source, the governor’s team might have hoped “for more out of Ron,” due to him not really criticizing Trump in his remarks, “but they knew the media would instantly jump on it and wish-cast it into existence.”

The source figured that McConnell sees DeSantis as the lesser of two evils and a means to irritate Trump.

Podcast host Holmes reportedly denied any malice toward Trump or coordination with McConnell, saying he did not want to get into a debate over the interview. Then, an undisclosed Republican official dismissed the idea that McConnell, who has stated openly that if Trump were to win the Republican nominee in 2024, he would “absolutely” back him, is trying to undermine the former president’s chances.

Moreover, John McLaughlin, Trump’s pollster, reportedly said that McConnell’s own ratings are not as “strong” as those of Trump to cause any real harm to the former president.

DeSantis is currently seeking re-election to his second and final term in Florida this year, not for the Senate, so McLaughlin believes that the governor is “focused on re-election,” while he noted that “Trump would crush the field if anyone wanted to run against him in the 2024 Republican primary. And most say they won’t.”

However, rumors about DeSantis’ probable ambitions for 2024 still somehow put him at odds with Trump and may have landed him in the middle of a fight between Trump and McConnell, according to the sources. DeSantis has developed as a national figure in GOP politics for being one of the most vociferous and high-profile governors opposing the pandemic lockdowns and mandates and is polling as the Republican primary front-runner for president in 2024 if Trump decides not to run himself.

John Bolton, Trump’s former national security adviser, told the outlet that there are “stories out now about Trump and DeSantis snapping towels at each other, because Trump can see the same thing that everyone else can: DeSantis is getting ready [to run] no matter what Trump does.”

Insiders reportedly claimed that Trump has been irritated for months by Republican affection for DeSantis and the coverage he has received in conservative media, as well as DeSantis’ refusal to openly pledge he would not run for president against him.

Trump reportedly likes to say that he “created” DeSantis in 2018 by endorsing him when he was a relatively unknown member of Congress, but in fact, the former president is said not to be worried about the Florida governor as a potential rival.

“DeSantis is definitely asserting his independence,” Trump’s top adviser said. “And yeah, it’s hard not to see the hand of McConnell in all this. Who benefits from a Trump-DeSantis feud? The Democrats. The media. And McConnell.”

After all, a former top aide for Trump told NBC that the former president is overly concerned about DeSantis for a simple reason.

“I don’t think he likes people being more popular than him,” they said.

Trump and McConnell have reportedly never spoken to each other since a crowd of Trump supporters rioted in the US Capitol on January 6 last year to prevent the electoral votes from being counted, confirming President Joe Biden’s victory against Trump.

Trump has regularly labeled McConnell an “old crow” and a “fake Republican” while asking GOP senators to remove him as the leader, while McConnell has chastised Trump for lying about his loss.

This year, Trump is endorsing a slate of Republican Senate candidates around the country. In Alaska, Trump-backed candidate Kelly Tshibaka, who is opposing McConnell supporter Sen.

Lisa Murkowski has stated that she will not vote for McConnell for Senate Majority Leader if the party regains the majority. Trump is reportedly urging other candidates to do the same.

McConnell is retaliating in Arizona by attempting to entice Gov. Doug Ducey, a Trump adversary, to run for Senate. Trump has stated that he will never support Ducey after he reportedly declined to assist him in overturning the state’s 2020 presidential election results.