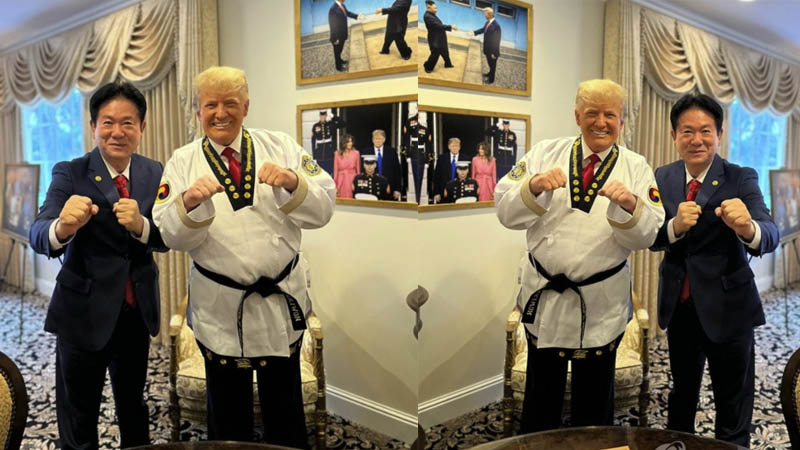 Kukkiwon President Lee Dong-seop on Saturday made a visit to Mar a Lago, Palm Beach, Florida, a resort of Mr. Trump, to bestow him the honorary ninth dan certificate and a set of Taekwondo wear.

“I heard that the Donald Trump is highly interested in Taekwondo,” Lee Dong-seop said, as quoted by the Daily Mail.

Lee said, requesting his continuous support and cooperation for Taekwondo and Kukkiwon. It was reported that a South Korean resident in the United States served as a bridge to enable their meetup.

“It is my pleasure and honor to receive this honorary certificate. Taekwondo is a great martial art for protecting oneself in these times (when COVID-19 prevails),” Mr. Trump said, adding that he will wear the taekwondo suit in the U.S. Congress if he makes it back to the White House. The former president also invited the Kukkiwon Taekwondo demonstration team to the United States.

Six photos on the wall at Mar a Lago captured attention during the delivery ceremony. Mr. Trump was shown in one of them shaking hands with North Korean leader Kim Jong Un in June 2019 at Panmunjom. Another picture showed him meeting Britain’s Queen Elizabeth in 2019.