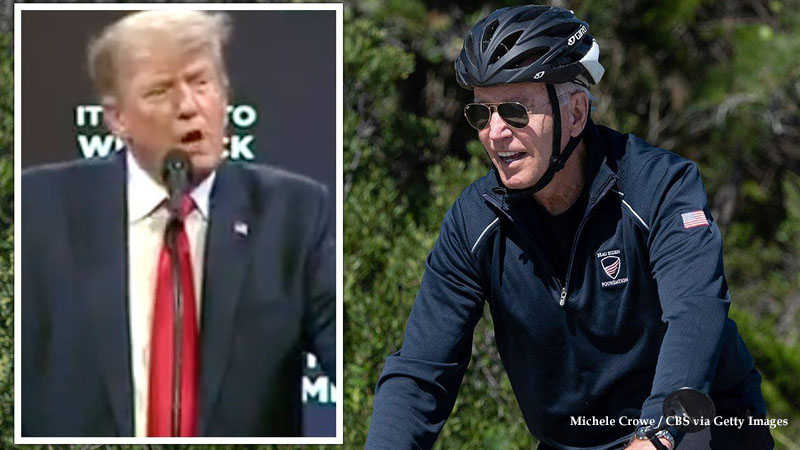 In a rare show of goodwill between the two political rivals, former President Donald Trump expressed sympathy for President Joe Biden after he fell off his bicycle.

“I hope he has recovered because, as you know, he fell off his bicycle today,” Trump said of Biden while speaking at his American Freedom Tour in Memphis, Tennessee, on Saturday.

“No, I’m serious. I hope he’s okay. He fell off a bicycle,” Trump said after the crowd responded with laughter.

Trump then joked: “I make this pledge to you today: I will never ever ride a bicycle.”

“But no, we do hope that Biden’s okay because that was a hard fall, that was scary. That was hard. Did anybody see it? Well, we wish him well in that respect.”

“As the President said, his foot got caught on the pedal while dismounting and he is fine. No medical attention is needed. The President looks forward to spending the rest of the day with his family,” a White House official said.

Following the discussion of the bicycle incident, Trump launched into a direct assault on Biden’s foreign policy, particularly his attitude to Russian President Vladimir Putin and the United States’ pullout from Afghanistan last year.

Trump attempted to mock Biden’s fall on Saturday night when he posted a fake video on his Truth Social account showing him hitting Biden in the head with a golf ball and causing him to fall from his bike, according to Business Insider.

The 79-year-old president was riding near his house in Rehoboth Beach, Delaware, on Saturday morning when he fell from his bike, but he quickly got up and declared he was “good.”

When he stood up after the event, he appeared to be unhurt.

Jennifer Lopez criticizes ‘racist’ Conan O’Brien joke during the relationship with Ben Affleck: ‘It was brutal’