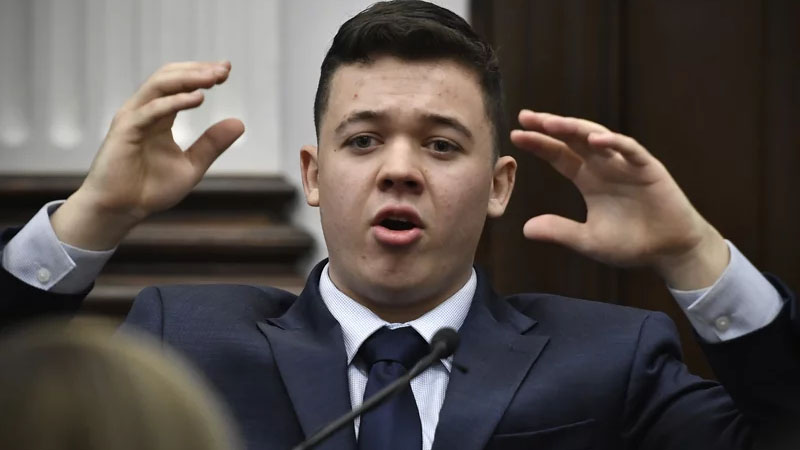 Kyle Rittenhouse testifies during his trial at the Kenosha County Courthouse on November 10, 2021 in Kenosha, Wisconsin.

Several left-wing student organizations at Arizona State University have demanded that Kyle Rittenhouse be “withdrawn” from the university.

Students for Socialism at Arizona State University, Students for Justice in Palestine, the Multicultural Solidarity Coalition, and MECHA de ASU are all urging the university administration to take action against Rittenhouse by dismissing him and releasing a statement against him.

The four organizations have dubbed him “Murderer Kyle Rittenhouse.”

On Nov. 19, jurors concluded their deliberations and found Rittenhouse not guilty on all charges. He was arrested after fatally shooting two people and injuring a third during riots in Kenosha, Wisconsin, on August 25, 2020.

According to 12News, Rittenhouse is an online student at Arizona State University

The groups also demand that the university administration “reaffirm support for the multicultural center on campus as a safe space from White Supremacy.”

Students making the demands also want the administration to redirect funding from the Arizona State University Police Department to the multicultural center and to “the establishment of a care center on campus.”

The groups are also hosting a “Rally and protest to get murderer Kyle Rittenhouse off our campus” on Dec. 1 at Arizona State University.

“Even with a not-guilty verdict from a flawed ‘justice’ system – Kyle Rittenhouse is still guilty to his victims and the families of those victims,” the demand letter states. “Join us to demand from ASU that those demands be met to protect students from a violent blood-thirsty murderer.”

According to a spokesperson for Students for Socialism at Arizona State University, the ultimate goal of the demands is to let the university administration know that they do not feel safe knowing that a “mass shooter” has been admitted to the school.

“The goal of these demands is to let the ASU administration know that we as the ASU community do not feel safe knowing that a mass shooter, who has expressed violent intentions about ‘protecting property’ over people, is so carelessly allowed to be admitted to the school at all,” the spokesperson said. “Our campus is already unsafe as is, and we would like to abate this danger as much as possible.”

The Students for Socialism chapter spokesperson contended that the Rittenhouse trial “effectively gives right-winged individuals the license to kill other individuals who protest for human rights.”

“Rittenhouse took the lives of innocent people with the intent to do so—by strapping an assault rifle to himself in a crowd of unarmed citizens. That is the textbook definition of intention. The decision made by the court is one of the thousands of cases that have been influenced by biased judges, predominantly white juries, and mistakes inherent in a judicial system founded off of injustice, to begin with,” the spokesperson said.

After their engagement, Jillian Michaels gushes over her fiancée DeShanna Marie Minuto: ‘Thank God For This Person,’ says the narrator

Trump Thinks Announcing 2024 Presidential Run Now Could Detract Attention From January 6 Hearings, Report Says. But Not All Republicans Are Convinced It Would Be the Right Move for the Party.