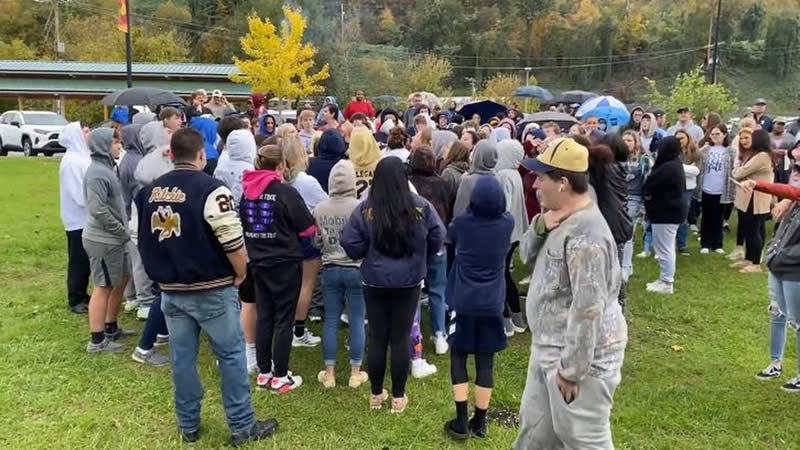 Dozens of students and parents gathered in downtown Hazard Thursday evening in support of their school and principal after gaining national attention for a controversial assembly where photos show male students dressed in lingerie and giving administrators lap dances.(WKYT) By Chad Hedrick

On social media, more Hazard High School skits have recently surfaced in which pupils acted provocatively as teachers laughed and sometimes participated during the past four years.

After the Hazard Independent Schools district announced Wednesday that it had launched an investigation into this year’s homecoming celebration, which included a “Man Pageant” and led to photos being posted on the school’s Facebook page of students giving lap dances in their underwear, the videos were shared with the Courier-Journal, part of the USA TODAY Network, on Thursday.

Superintendent Sondra Combs said the probe resulted in “appropriate disciplinary action,” but she wouldn’t specify who was punished. Students were behind the “homecoming festivities,” according to Combs, who classified the incident as an isolated incident.

However, according to fresh films obtained by the Courier-Journal, similar skits have been conducted before.
One video, initially released on Instagram in October 2017 and then again in January 2018, shows a male student wearing a bra, shorts, and wig grinding on two other male students sitting in chairs in the middle of the gym, while a fourth student throws a wad of what appears to be cash into the air.

The gym’s background and emblem on the floor match the photographs provided earlier this week, and the video was uploaded by a former Hazard High student.

Another video shows a male student in a long white gown and wig dancing in the center of the school gym to Madonna’s “Like a Virgin.” The student crawls toward the throng after rolling about on the floor.

The student approaches Principal Donald “Happy” Mobelini during the farce and rubs his hands over his head and chest. The video shows Mobelini clapping his hands to the beat of the song as the skit progresses.

Although some kids and staff members were wearing masks over their noses and mouths, indicating that the video was filmed during the coronavirus epidemic, it is unclear when the video was taken. The gym’s background and branding on its floor are identical to the photographs posted this week.

The “Man Pageant” has been a historical homecoming ritual, according to Tosha Lindon, a mother whose son attended Hazard High.

Nonetheless, Combs referred to this year’s celebration as the first of its sort.

“We strive to foster creativity in our students, but unfortunately, this time it was carried too far,” Combs said in an emailed statement Wednesday evening.

The homecoming activities “all were intended to be fun and good-natured however, the activities did not play out as intended,” she said Wednesday. “While Homecoming is an annual tradition, there has never been an issue raised prior to this year.“

“At the end of the day, the light-hearted activity simply got out of hand, and for that, we apologize. In the future, we will strive to keep the lighthearted, fun nature of school activities without the inappropriate behavior,” Combs said.
Independent board members Combs and Hazard could not be reached for comment on the new footage right away.
During his Thursday press briefing, Gov. Andy Beshear replied to the recent images, calling them “totally unacceptable” and “inappropriate.”

The district and state leadership “need to take appropriate action and ensure that this will never happen again,” he said.

Furthermore, Beshear said adults at the school were rightfully criticized for letting it go on and district leadership should “make sure that we’re raising our kids right about what is and is not acceptable, especially in the world that we live in.”

The findings of the district’s investigation, as well as any penalties imposed, should be made public, he stressed.
After seeing the photographs from Tuesday, Frank Newberry, a father with two children in the district, said he was “horrified.”

“My problem is not with the children — they’re children, children do goofy things. My problem is the adults and their reaction to it,” Newberry said. “I expect kids to be kids. But, I expect the adults tasked with supervising them to show better judgment than that.”

As per USATODAY, after viewing the videos, Kentucky Department of Education spokeswoman Toni Konz Tatman said the department does not get involved in local district matters.

“KDE was made aware about what took place in Hazard Independent Schools yesterday morning and reached out to the superintendent. She informed us yesterday that the incident is under investigation,” Konz Tatman wrote.

According to Konz Tatman, Kentucky law mandates superintendents to disclose any instances of educator misconduct.

Hazard is located in southeastern Kentucky, about a three-hour drive from Louisville and two hours from Lexington. According to U.S. census records, the population is around 5,000 people.

Hazard Independent Schools is made up of three schools, one of which is Hazard High. According to U.S. News & World Report, it is the district’s lone high school, with roughly 340 students enrolled. On the school’s directory, there are 32 staff members mentioned.

Kamala Harris mocked for touting over a ‘yellow school bus: ‘They really can’t let her talk in public’