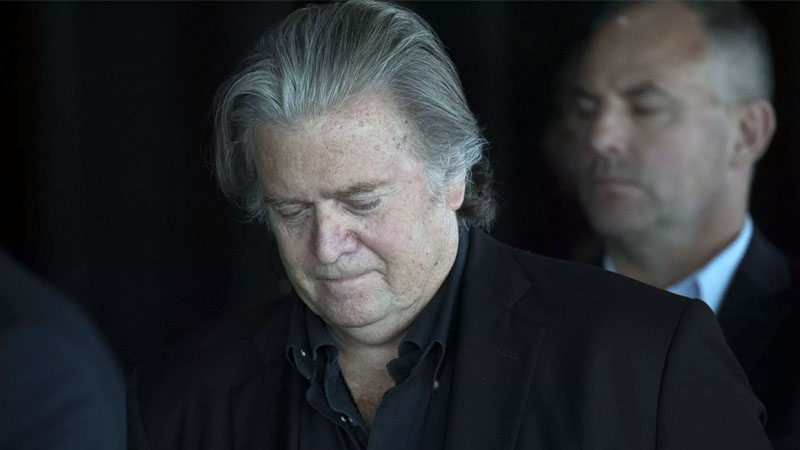 The former Donald Trump aide defied a subpoena from a committee investigating the events of 6 January 2021, when crowds stormed the Capitol building in a bid to stop Congress from certifying Joe Biden’s win in the 2020 presidential election.

Former White House Chief Strategist Steve Bannon has been found in contempt of Congress following a Thursday vote in the House of Representatives for defying a subpoena to testify before a panel investigating the 6 January Capitol riot.

The House voted 229-202 for the resolution, essentially falling along party lines, aside from nine Republicans who sided with the Democratic majority. They have now referred the issue to the US Department of Justice. If found guilty by the DOJ, he could face a year in prison and a $100,000 fine.

Bannon was just one of many subpoenaed by the US House Select Committee to Investigate the January 6th Attack on the United States Capitol, a group set up to gather files and testimony about the insurrection launched by supporters of Trump. Earlier this week, Trump filed a lawsuit against the committee and the National Archives in an attempt to block the transfer of records under the aegis of executive privilege.

A former senior adviser to Trump, the far-right ideologue was fired in August 2017 after publicly contradicting Trump’s policies toward China and the Democratic People’s Republic of Korea. However, he continued to be a strong supporter of Trump and played a major role in constructing the media effort pushing the “Stop the Steal” campaign.

“It’s not going to happen like you think it’s going to happen,” Bannon told listeners of his radio show on January 5, the day before the riot, referring to the White House rally scheduled for the following day. “It’s going to be extraordinarily different.

And all I can say is: Strap in.” Thousands of Trump supporters stormed the national legislative building on the afternoon of January 6, 2021, following a rally by Trump outside the White House at which he encouraged them to “stop the steal,” alleging now-US President Joe Biden had won the November 2020 election fraudulently.

While they temporarily succeeded at dispersing Congress, which was then in the middle of certifying the election results, they failed at the goal of stopping the certification outright and were soon cleared from the building by thousands of US National Guardsmen deployed to garrison the capital city.

Five people died in the assault, including a US Capitol Police officer and a rioter who was shot outside the House chamber by a USCP officer. Trump was impeached on charges of inciting acts of insurrection but was acquitted in a trial weeks after he left office.