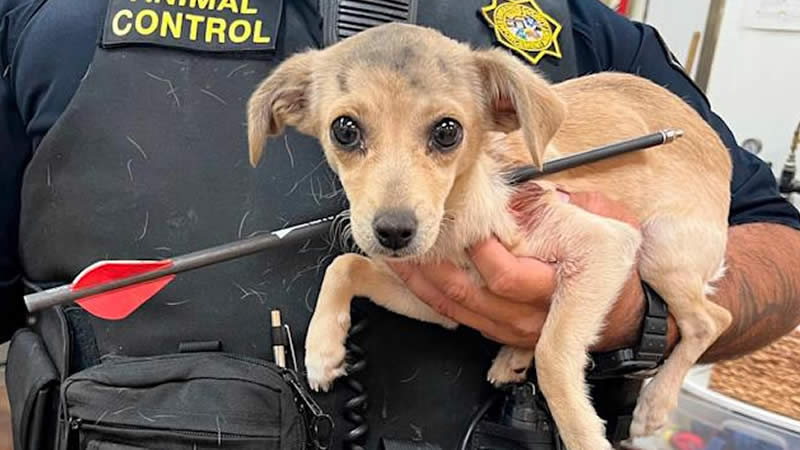 A 4-month-old Chihuahua is expected to survive an arrow wound in its neck, according to a spokesperson for Riverside County Animal Services.

The female puppy was found Monday morning in the 15500 block of Avenida Florencita in an unincorporated area of Desert Hot Springs by a woman.

According to John Welsh, a spokesperson for animal services, she told a 911 Riverside County sheriff’s dispatcher that she found the puppy after being awakened by the sound of the injured dog “screaming,”

At the intersection of Varner Road and Date Palm Drive, a sheriff’s deputy picked up the dog and met Animal Services officer Matthew Perez. Perez then took the dog to the nearby Coachella Valley Animal Campus in Riverside County, according to cbs news.

Ivan Herrera, a registered veterinary technician, sedated the dog and took X-rays, which were reviewed by staff veterinarian Dr. Luis Lizarraga, who determined that the arrow did not strike the puppy’s vital arteries.

Emily Ellison, a veterinary technician, assisted Herrera with the dog’s treatment and recovery and commended Herrera on the safe removal of the arrow.

“It’s amazing to see her affection, despite what occurred. She is such a sweet puppy. I cannot imagine why anyone would do something so terrible to such an innocent creature. It’s very sick,” Ellison said.

“We are shocked and we hope someone can provide us any information as to who did this. Meanwhile, we’ll continue to treat this puppy and work on finding her a suitable home,” Gettis said.