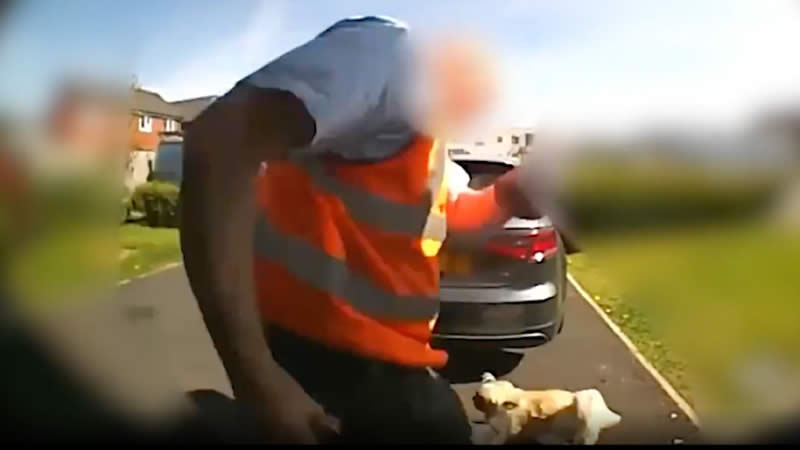 A shocking incident was caught on camera in which a postman viciously kicked a family’s dog while making a parcel delivery. The homeowner said her daughter was in tears after seeing the man assault the pet.

The attack was captured on the doorbell camera of a home in Greater Manchester, where the Royal Mail employee was delivering a parcel.

The postman can be seen in the video handing the package to a teenage girl who answered the door. According to 7 News, a dog then runs toward him barking.

The man appears to kick the dog as it approaches, sending it flying across the driveway. The pooch then runs off into the garden, and the postman walks off.

The incident left the homeowner’s daughter crying, and the dog was so terrified that it now wets itself whenever the doorbell rings, according to Manchester Evening News.

“My daughter answered the door for the delivery. I was outside hanging washing up and she ran in and told me what had happened. My daughter was very upset.

She was crying her eyes out and she’s not an emotional kid,” the woman, who hasn’t been publicly identified, said, as per the outlet. “My dog is terrified of going to the door and when the doorbell goes, he wets himself and is visibly shaking.”

After the assault, the homeowner said she filed a formal complaint with Royal Mail. However, the postman involved in the incident claims that he kicked the dog after it nipped him in the ankle.

As per The Sun, Royal Mail reportedly apologized to the homeowner in a letter. “We wish to again express our regret and offer our apologies once more for the upset, especially to your young daughter.

Royal Mail staff are family people, with cats, dogs, and other pets and we fully appreciate what a huge part of a home they are,” it wrote, according to the outlet.

In the letter, Royal Mail officials also stated that 33 of their workers are injured by dogs every week. Royal Mail takes “all dog attacks on our postmen and postwomen very seriously,” according to a spokesperson for the postal service and courier company who spoke to Manchester Evening News, and prioritizes “the welfare and safety of our people who provide a valuable service to our customers.”

Meanwhile, Royal Mail issued a statement to the outlet urging its customers to be responsible pet owners. “The vast majority of dog owners are very responsible and keep their pets under control.

However, last year, there were 1,690 dog attacks on postmen and women in the UK — some resulting in life-changing injuries. We continue to appeal to dog owners and their families to help reduce the number of attacks, particularly at the door and in the garden,” the company said. “Customers who would like more information about how to prevent dog attacks when the postman visits their property can visit website“

Prince Harry, Meghan Markle “Won’t Be Seen Much” At Platinum Jubilee: “I Think That They Will Mostly Take Part in Private Celebrations”

Elon Musk donated $1 million to charity in “honor” of girlfriend Amber Heard: “because Johnny sued me for $50m in 2019”