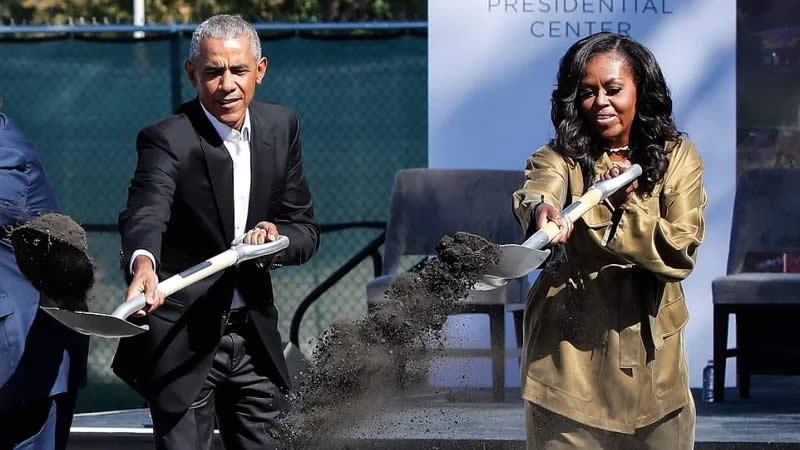 Obama said during the event, “This day’s been a long time coming. The pandemic had other plans, so we’re keeping this small for now.”

The project’s proposed site has caused controversy, with some community activists alleging that the new center will raise home rental costs, potentially pricing many residents out of the market.

Environmental activists have also expressed their opposition to the proposal, claiming that it would cut down too many trees and damage some bird habitats.

During his speech, Obama downplayed the dispute, stating the center would “plant new trees” and “provide new habitats for birds and wildlife.”

“Chicago is where almost everything that is most precious to me began,” Obama said. “It feels natural for Michelle and me to want to give back to Chicago and to the South Side in particular … We will always be grateful for that, and the Obama Presidential Center is our way of repaying some of what this amazing city has given us, but we’re also building this center because we believe it can speak to the struggles of our time.

”Protesters gathered at the event to express their concerns about the project’s potential impact on local people.

“Our renters need protections. You shouldn’t be able to buy a building in South Shore [and] not tell folks that you’re trying to get it. Not renew folks’ lease and try and push them out despite the fact that they’re long-term residents that have been paying,” one protester said.

Illinois Gov. J.B. Pritzker and Chicago Mayor Lori Lightfoot joined the Obamas at the groundbreaking. She said, “This groundbreaking marks the next chapter in a journey that began several years ago, with many twists and turns, but due to the perseverance, dedication, and the hard work of many, we’ve arrived at this momentous day. This is the future of the South Side that will be created in partnership with the community.”

Legendary boxer Manny Pacquiao has Retired after a 26-year Career