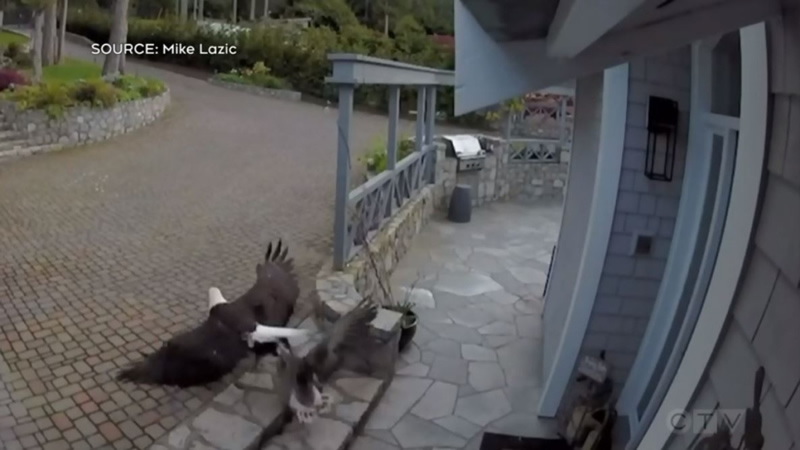 A mother saved her pet goose from an eagle attack while nursing her baby girl in North Saanich, British Columbia.

Cait Oakley realized something was wrong while breastfeeding her infant daughter on May 16 when she heard her goose Frankie screaming.

“She just sounded different, so I went to the front door in the middle of feeding our babe,” Oakley told CTV News.

“As soon as I opened the door, the eagle just swooped down right then,” she added of the bird’s attack on Frankie. “That was the only thing in my head, just like, ‘Drop it!’”

Oakley, who was partially dressed and holding her baby at the time, yelled and ran after the eagle to save her goose.

“It’s just that fight-or-flight response,” she told CBC News and added, “This is mom life.”

“Mike just ran outside, and the first thing he said to me was, ‘You’re topless,’ and I’m like, ‘I’m very aware of the situation,’” Oakley told CTV News.

The incident was captured on the family’s home security camera, so Lazic uploaded the video to TikTok with his wife’s permission, and it now has over 20 million views.

“If something was to go viral, I’d prefer to be clothed and not in some boxer briefs but hey, you know what, that’s mom-hood,” she told CTV News. “Got to save my goose from the eagle.”

Oakley told CBC News that Frankie is “like my fourth child.”

“She follows me around the yard … she’ll nip at our clothes for a treat. She’s just such a large presence,” she added.

Oakley also stated that the pet goose is recovering well from the attack.

Frankie is now allowed to wander the yard, but the couple has pens for all of their animals.

“We’ve lost a lot of animals due to hawks and minks and otters and raccoons, so now we have everything secure,” Lazic told CTV News.