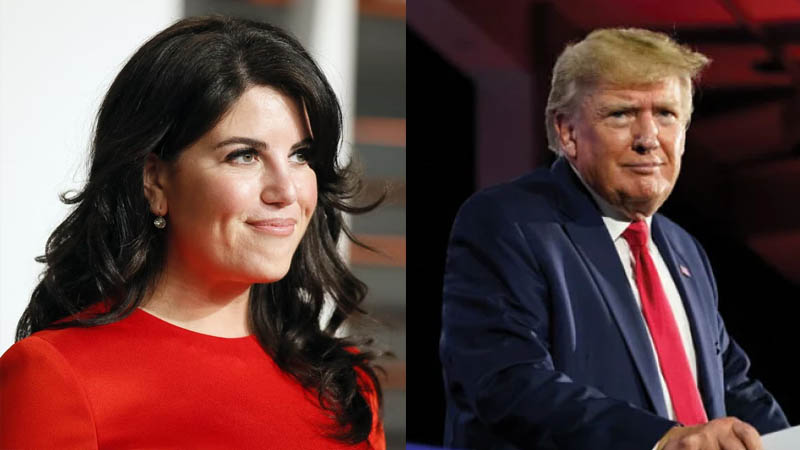 In light of recent testimony that Donald Trump physically altercation with a Secret Service agent while attempting to take control of the presidential limousine’s wheel to travel to the Capitol on January 6, 2021, Monica Lewinsky, 48, is coming up.

The ex-White House intern tweeted a popular meme with comments that reflected the situation with Trump in the past, showing a man turning to gaze at another girl with a delighted face while his girlfriend is furious with him. The captions featured the boyfriend being called “p*ssy,” the other girl being called a “steering wheel,” and the guy being called “Trump.”

“(i think i did this correctly),” Monica cheekily captioned the tweet, which was met with a lot of mixed responses. It came after Cassidy Hutchinson, an aide to former White House chief of staff Mark Meadows, testified about the alleged altercation between Trump and the agent, during a hearing for the Jan. 6th incident on June 28.

“The president said something to the effect of, I’m the f*cking president, take me up to the Capitol now,” she told the House committee investigating the Capitol attack. “To which [Secret Service agent Bobby Engel] responded, ‘Sir, we have to go back to the West Wing.’”

“The president reached up toward the front of the vehicle to grab at the steering wheel. Mr. Engel grabbed his arm and said, ‘Sir, you need to take your hand off the steering wheel, we’re going back to the West Wing. We’re not going to the Capitol,’” she continued.

While the cameras weren’t rolling during a 2005 conversation with Access Hollywood’s previous host, Billy Bush, Trump was heard indicating that he believed he could do whatever he wanted even before he was president. This was cited in Monica’s tweet about the testimony that appeared to also be referring to this. “When you’re a star, they let you do it. You can do anything. Grab them by the p*ssy. You can do anything,”,” Trump said, referring to women, in the audio from the conversation.

Monica’s answer to the most current Trump allegation was made at the same time that Hutchinson’s other shocking claim was made public. The former White House staff reportedly claimed that after reading an interview with Attorney General Bill Barr, Trump hurled a dish of his lunch against the wall of the White House dining room. Contrary to what Trump has stated, Barr disputed that the 2020 presidential election was rigged in the interview.

“[There was] ketchup dripping down the wall and a shattered porcelain plate on the floor,” Hutchinson said about what she saw while walking into the dining room after the alleged incident. “He was extremely angry at the Attorney General’s [Associated Press] interview and had thrown his lunch against the wall.”

Ontario boy celebrates birthday at Metro grocery store: ‘I’m not crying, you are