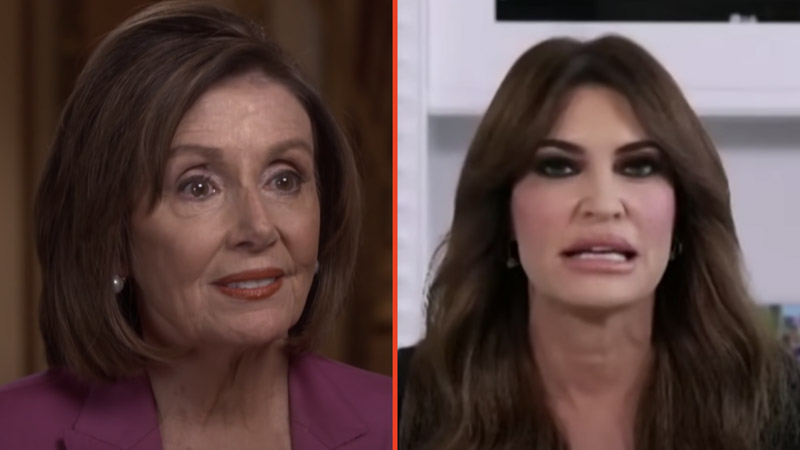 Kimberly Guilfoyle, Donald Trump Jr’s fiancé, has accused Nancy Pelosi of having had” too much” plastic surgery on her face in a live news interview.

In an interview on Newsmax’s Rob Schmitt Tonight, the ex-Fox news host said: “Nancy Pelosi has had too much done on her face”.

In a Biden-themed rant, she continued: “Pelosi lying what’s left of her face off about Biden’s accomplishments … it’s a freak show. It’s fright night.”

Guilfoyle has worn so many hats. She is currently the national finance chairman of MAGA and was previously an advisor to the Trump administration.

The 53-year-old began her legal career as a prosecutor in San Francisco in the early 2000s.

Her first husband, Gavin Newsom was a Democratic politician who was elected mayor of San Francisco in 2004. Guilfoyle was thus the city’s First Lady until the couple divorced in 2006.

Following a stint at Fox News, her focus shifted to the Republican Party and Trump’s campaign.

Guilfoyle has been in a relationship with Donald Trump Jr, Donald Trump’s eldest son, since 2018.

Guilfoyle took a scathing attack on President Joe Biden, the Democrats, and the media.

She said: “It’s like the greatest hits of incompetence and idiocy and yet we have little clapping seals in the media that are complicit. It’s like the guy can do no wrong.”

She passionately added: “This country deserves so much better.”

According to Radar Online, Pelosi, 82, appeared wrinkle-free at a press conference in the Capitol in mid-August.

These claims, however, have no actual basis, and Nancy has made no indication that she has had plastic surgery.

Fauci Believes Most States Will Hit Omicron Peak in Mid-February