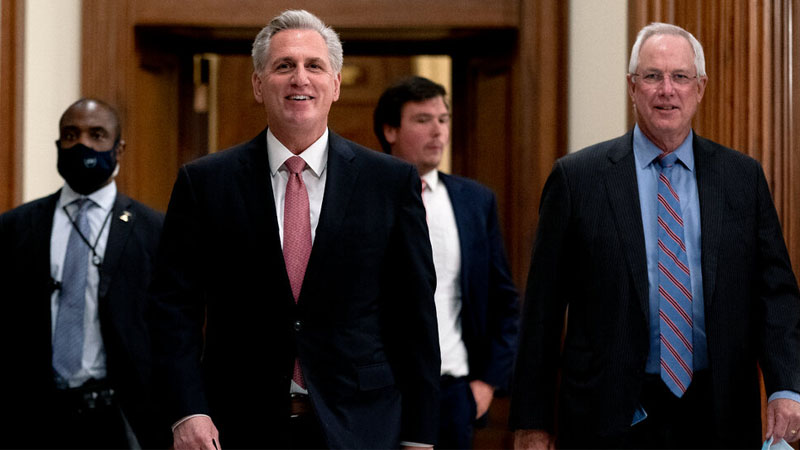 “It’s sad but not surprising that Kevin McCarthy is continuing down the morally bankrupt path of embracing House Republicans who are white supremacists and conspiracy theorists, but attacking Liz Cheney for telling the truth and standing for the Constitution,” Mr. Adler said.

A principal at The Morning Group, Mackenzie Jortner Dolan, declined to comment on the firm’s decision to drop Ms. Cheney. As of mid-September, Ms. Dolan was still working for the congresswoman, emailing Republican donors to promote a fund-raiser Ms. Cheney held in Dallas on Monday with former President George W. Bush.

Ms. Cheney has not suffered financially for her outspoken criticism of Mr. Trump and Mr. McCarthy. Through the end of September, she had raised over $5 million and had more than $3.6 million on hand.

She has retained support from an array of leading Republicans, including Mr. Bush; Mitch McConnell, the Senate minority leader; and the former House Speakers John Boehner and Paul Ryan.

She has, however, emerged as perhaps Mr. Trump’s top priority to defeat. After meeting with a series of would-be challengers, Mr. Trump in September endorsed Harriet Hageman, a Cheyenne attorney who had taken part in a failed, last-ditch effort to strip him of the 2016 Republican presidential nomination two months after he had clinched it.

Ms. Hageman, who was once a Cheney family friend and served as an adviser to Ms. Cheney’s short-lived 2014 Senate campaign, raised just over $300,000 for the quarter, but she only filed her candidacy on Sept. 9.

Mr. Trump has endorsed a handful of other Republicans challenging the lawmakers who voted to impeach him and was exultant last month when Representative Anthony Gonzalez of Ohio, who cast one of the 10 Republican votes to impeach, said he would retire from Congress rather than run against a former Trump White House official.

“1 Down, 9 To Go!” the former president said in a statement at the time.