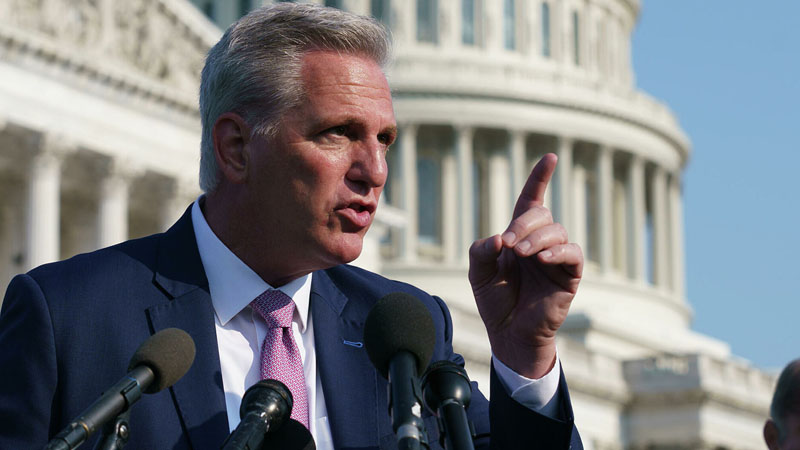 GOP House Minority leader Kevin McCarthy, if the GOP takes control of the House in the November midterm elections, is considering legislation to limit lawmakers from trading stocks while in office. The news comes shortly after House Speaker Nancy Pelosi (D-CA) came out against such regulations.

In an interview with the Punchbowl, McCarthy raised possible limitations he would look to enact. An idea that has gained some traction is to force lawmakers to hold only professionally-managed mutual funds. Another proposal he is considering is a ban on lawmakers trading and owning stocks in companies or industries overseen by committees on which they sit.

McCarthy admitted that these plans are in their early stages, and it is unknown if it would gain enough traction if it came to a vote. The conversation over lawmakers and their families trading stocks returned to the forefront following Pelosi’s statement against such regulations.

When asked about instituting limits against lawmaker trading at a December 15, 2021, press conference, Pelosi said, “We’re a free market economy, [lawmakers] should be able to participate in that.”

The Stop Trading on Congressional Knowledge Act (STOCK Act), enacted in 2012, prohibits lawmakers and their aides from using non-public information for private profit. The act also requires public disclosure of stock and bond transactions within 45 days.

Access to proprietary information by lawmakers, through security intel and/or policy, can affect markets and has led to some dubious acts. Some politicians were briefed over the dangers of the coronavirus pandemic well before the public was aware.

The probes did not lead to any charges but highlighted how little oversight and accountability there is of lawmakers using their insider position to enrich themselves.

Lawmaker trading appears to be a bipartisan issue, and members of both parties are known to participate, leading many to suspect that McCarthy will face an uphill battle.

California Man Pleads Guilty To Taking Two Baby Bears from Their Den, Notifies Authorities After He Was Unable To Care for Cubs