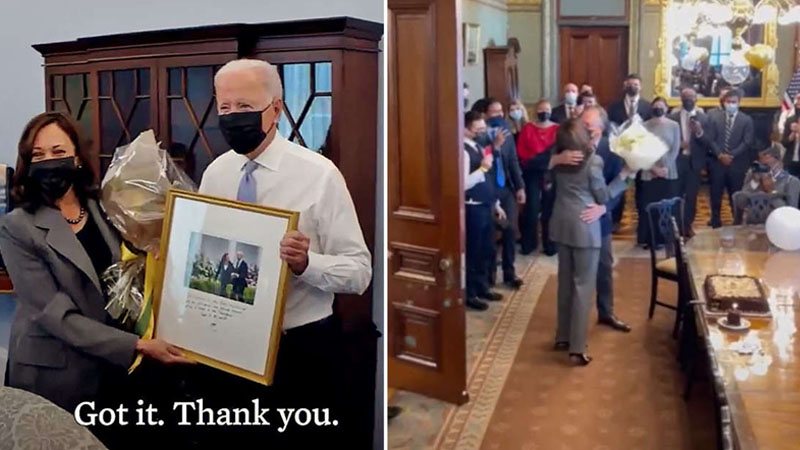 On October 20, United States (US) Vice President Kamala Harris turned 57. President Joe Biden surprised her on her special day with a gorgeous bouquet of flowers and a photo frame of the two of them walking side by side.

The President’s gesture pleased her, and she accepted the flowers, after which her birthday was celebrated in the White House.

Biden can be seen holding a bouquet and a frame as he walks inside the vice president’s office in the 34-second video, which was shared on Twitter. Harris, who is dressed in a grey blazer and matching pants, looks surprised as Biden enters with gifts.

“Really? Aw Joe, I’m very touched. Thank you,” Harris is heard saying as she kisses him on the cheek. Biden then turns the frame, revealing the photo in which both of them are seen walking alongside each other in front of the White House.

Harris said while looking at the photo, “This is my favorite. I’m gonna hang this up with great pride”. Following that, they both posed for a photo with the gifts.

Later that day, Harris was surprised by her employees with balloons and a chocolate sheet cake with a candle on top. The crowd shouted ‘Surprise!’ and sang ‘Happy Birthday’ as soon as she walked into the room. On her special day, she accepted another bushel of flowers.

Harris was born on October 20, 1964, in Oakland, California. Donald J Harris, a Stanford professor, and Shyamala Gopalan, a Tamil Indian biologist, gave birth to her.