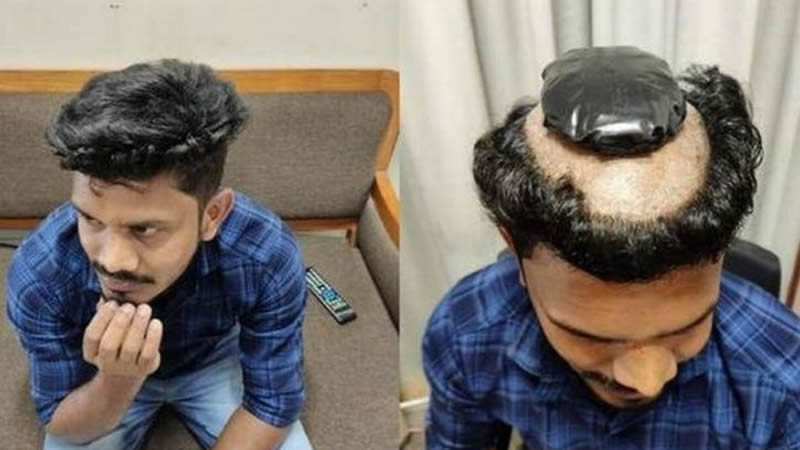 A man was arrested by customs officials at New Delhi’s Indira Gandhi International Airport after he was caught trying to smuggle gold worth almost $40,000 into the country.

A man was arrested by customs officers at New Delhi’s Indira Gandhi International Airport on Monday after attempting to smuggle melted-down gold valued at around 3,055,000 Indian Rupees ($39,947), The Times of India reported.

The gold was hidden in a pouch buried beneath a wig worn by the man, according to a customs official, as reported by The Times of India.

According to News18, the wig is cut away in a video shared by Delhi Customs, revealing a pouch of melted gold stuck to the top of his bald head.

According to The Times of India, the man was traveling from Abu Dhabi and possessed an Indian passport. A customs official told The National that he was seized after departure from his flight.

According to The National, other investigations are underway.

Carrying gold on planes is not illegal in and of itself, but travelers must declare the amount they are importing or exporting and pay the higher taxes.

It’s not the first time someone has used a wig to bring gold into India.

Under their wings, two men were captured smuggling gold and cash worth about $383,000 into Chennai International Airport in southern India last March.

Following their return from Dubai, Magroob Akbarali and Zubair Hassan Rafiyutheen were arrested at the airport’s departure when their odd hairstyles sparked concerns.

According to a 2019 article from the Indian newspaper The Tribune, carrying gold in paste form is a method that has been adopted by smugglers hoping to dodge metal detectors and x-ray machines at airports.

An unnamed official from the Directorate of Revenue Intelligence (DRI) said: “Smugglers first convert yellow metal into powder and then produce its compounds in paste form. Around 700 gms of gold can be retrieved from every 1,000gms of paste by undertaking a chemical procedure.

“Involvement of some prominent jewelers and gold dealers across big cities cannot be ruled out. We are trying to identify potential end-users so as to break the nexus between smugglers and jewelers.”