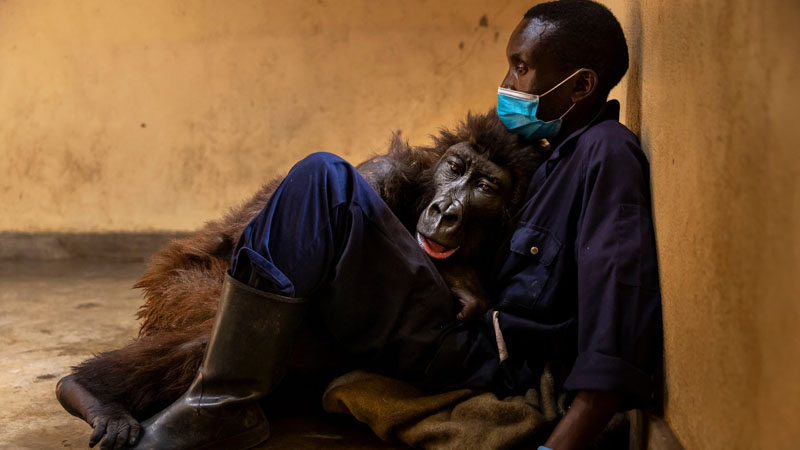 Fourteen years ago, Ndakasi the mountain gorilla was found clinging to her dead mother in the Congo after bushmeat hunters wiped out her entire family. This week it was announced that she recently passed away in the arms of Virunga National Park ranger André Bauma, the man who rescued her.

Bauma served as Ndakasi’s caretaker since he brought her to the park’s Senkwekwe Center, where she was rehabilitated along with another orphaned gorilla named Ndeke. Unable to be safely returned to the wild, Ndakasi lived her life in Virunga, where mountain gorilla conservation is a priority.

The park shared a touching photo and announcement of Ndakasi’s passing on Facebook. The gorilla had been suffering from a prolonged illness, and her condition had rapidly deteriorated. A photo shows Bauma sitting on a blanket leaning up against the wall with Ndakasi lying next to him, her head on his chest and her toes gripping his boot.

“Ndakasi took her final breath in the loving arms of her caretaker and lifelong friend, André Bauma,” reads the post.

“It was a privilege to support and care for such a loving creature, especially knowing the trauma Ndakasi suffered at a very young age,” Bauma said. “One could say that she took after her mother, Nyiransekuye, whose name means ‘someone happy to welcome others.’

“It was Ndakasi’s sweet nature and intelligence that helped me to understand the connection between humans and Great Apes and why we should do everything in our power to protect them. I am proud to have called Ndakasi my friend. I loved her like a child and her cheerful personality brought a smile to my face every time I interacted with her.”

André Bauma has said that he cares for the gorillas at Senkwekwe Center as if they were his own children. And in Ndakasi’s case, she quite literally was.“We shared the same bed, I played with her, I fed her … I can say I am her mother,” he told the BBC in 2014. Mountain gorillas are endangered, so the protection of every gorilla counts.

Being a park ranger in the Congo is far more dangerous than it is in the U.S., more along the lines of being a soldier at war than a caretaker of a piece of land. Conflict in the region and struggles over resources means the rangers put their lives on the line to protect Virunga National Park and the animals that call it home.

From oil companies trying to invade the park to bushmeat hunters with their sights on the gorilla population to rebel militias burning trees to make valuable charcoal, rangers have to constantly fend off threats to keep the area safe. More than 200 rangers have been killed in attacks going back more than a decade, according to the BBC.

In the face of all of that, Bauma calls his work “love.” And that work has paid off. Mountain gorillas have been endangered for decades, but the protection provided by the rangers has enabled the population to swell to more than 1,000—still a startlingly low number, but one that has been steadily increasing.

Vice News created an informative video about the rangers who protect Virunga and the gorillas who call the park home. (There are some potentially disturbing clips of dead gorillas, so viewer discretion is advised.)