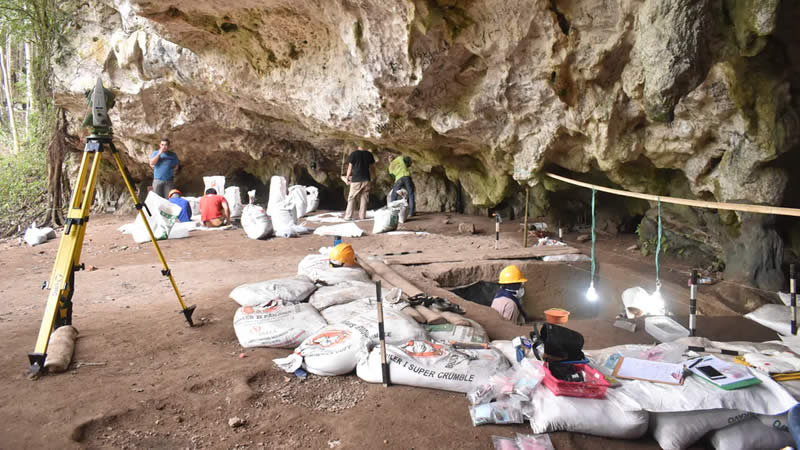 A surprising discovery demonstrates how little we know about our region’s early human history.

Archaeologists from the University of Hasanuddin in Makassar, Indonesia’s Sulawesi Island, discovered a woman’s skeleton buried in a limestone cave in 2015. According to studies, the person who died some 7,200 years ago in Leang Panninge, or “Bat Cave,” was 17 or 18 years old.

Her discoverers dubbed her Bessé’ (pronounced bur-sek¹) — a nickname bestowed on newborn princesses among the Bugis people who now live in southern Sulawesi. The name reflects the high regard in which local archaeologists hold this ancient woman.

She is the sole Toalean skeleton that has been discovered. Before Neolithic farmers from mainland Asia (“Austronesians“) spread into Indonesia some 3,500 years ago, these enigmatic hunter-gatherers occupied the island.

Our team found ancient DNA in Bessé’s inner ear bone, providing us with the first direct genetic evidence of the Toaleans. This is also the first revelation of ancient human DNA from Wallacea, the enormous collection of islands between Borneo and New Guinea, the largest of which is Sulawesi.

Bessé’ belonged to a group with a hitherto unknown ancestral composition, according to genomic study. She shares around half of her DNA with Indigenous Australians today, as well as people from New Guinea and the Western Pacific. This includes DNA from Denisovans, who were distant cousins of Neanderthals and are now extinct.

In fact, the proportion of Denisovan DNA in Bessé’ could indicate that the main meeting place between our species and Denisovans was in Sulawesi itself, compared to other ancient and modern tribes in the vicinity (or perhaps a nearby Wallacean island).

The pre-Neolithic woman’s origins shed light on the little-known demographic history and genetic variety of early modern people in the Wallacean Islands, which serve as a gateway to the continent of Australia.

The Toaleans’ archaeological tale dates back more than a century. The Swiss naturalist’s Paul and Fritz Sarasin excavated several caves in the southern Sulawesi mountains in 1902.

Although several Toalean cave sites have recently been excavated to better scientific quality, our knowledge of this civilization is still limited. Around 8,000 years ago, the oldest known Maros points and other Toalean items were discovered.

The Toaleans were hunter-gatherers who preyed primarily on wild endemic warty pigs and gathered edible shellfish from creeks and estuaries, according to cave discoveries. So yet, only one section of southern Sulawesi has yielded evidence for the group.

By the fifth century AD, Toalean items had vanished from the archaeological record, a few thousand years after the island’s initial Neolithic inhabitants.

Prehistorians have long sought to determine who the Toaleans were, but efforts have been impeded by a lack of securely-dated human remains. This all changed with the discovery of Bessé’ and the ancient DNA in her bones.
The Ancestral Story of Bessé’

Our findings support previous assumptions that the Toaleans were related to the earliest modern humans who arrived in Wallacea some 65,000 years ago or more. The ancestors of Aboriginal Australians and Papuans were these seafaring hunter-gatherers.

They were also the first occupants of Sahul, the supercontinent that arose when global sea levels decreased during the Pleistocene (ice age), revealing a land bridge between Australia and New Guinea. These intrepid individuals traveled through Wallacea to reach Sahul, but nothing is known about their journeys.

It’s possible that Bessé’s ancestors were among the first to arrive in Wallacea. Instead of going from island to island to get to Sahul, however, they remained in Sulawesi.

However, our research uncovered a deep ancestral signal from a pre-modern human group that originated in continental Asia. These Bessé’s ancestors did not interact with the forefathers of Aboriginal Australians and Papuans, implying that they arrived in the region after Sahul’s first peopling but before the Austronesian expansion.
Who were these individuals? When did they first appear in the area, and how widespread did they become? We won’t know the answers to these issues until additional ancient human DNA samples and pre-Neolithic fossils from Wallacea become available. This unexpected discovery demonstrates how little we know about our region’s early human history.

A New Look At the Toaleans

We’re starting new research with funds from the Australian Research Council’s Discovery program that will delve deeper into the Toalean universe. We intend to understand more about the development of this unique hunter-gatherer society through archaeological investigations at Leang Panninge.

We also want to answer certain long-standing questions about Toalean social structure and lifestyles. Some academics believe the Toaleans grew so large that previously small and dispersed groups of foragers began to settle down in vast sedentary villages, potentially even domesticating wild pigs.

It’s also been speculated that Toaleans was the mysterious Asian seamen who came to Australia in ancient times and brought the dingo with them (or more accurately, the domesticated ancestor of this now-wild canid). There’s certainly a lot more to learn about Bessé’ and her family’s long island history.

This article is republished from The Conversation under a Creative Commons License. Read the original article.

Zayn Malik refuses that he harassed Gigi Hadid and her mother Yolande, but accepts punishment