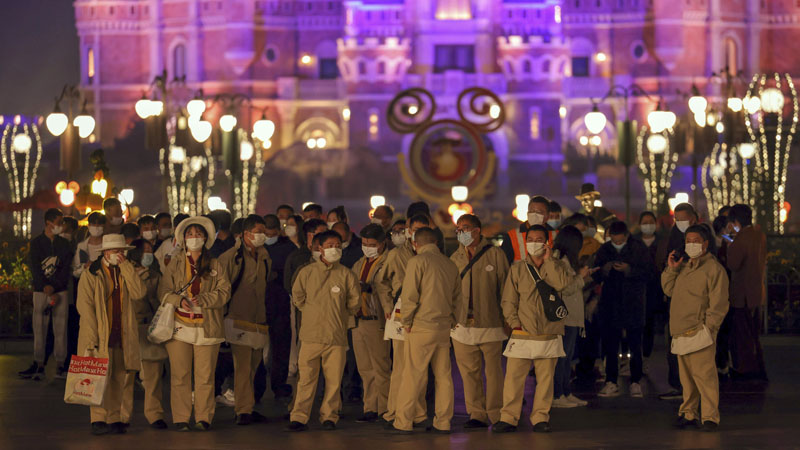 Pandemic control authorities in China shut down Disney’s largest amusement park and subjected all employees and visitors to mass testing. People waiting in line for a swab test instead of a rollercoaster ride may have had a bad Halloween, but the action got significant approval on Chinese social media.

Thousands of people had to stand in line for hours to be tested for COVID-19 during an unexpected shutdown at Shanghai Disneyland on Halloween night, making it far from “the happiest place on earth.”

After a person who tested positive for COVID-19 was discovered to have visited the site on Saturday, Shanghai Disneyland announced on Sunday evening that it would temporarily suspend entry to the park and its adjacent shopping district, Disneytown, as well as the operation of some attractions within the park, in cooperation with “pandemic investigation in other provinces and cities.”

“Outdoor performances will continue as scheduled,” the theme park said in a statement posted to Weibo at 6:05 p.m. local time on Sunday. “Guests who are inside the park are reminded to strictly comply with pandemic prevention measures, including wearing a mask and maintaining social distance at all times.”

Local healthcare workers hurried to the site as the partial lockdown went into force to conduct a mass test of the guests already inside. With an army of police officers blocking the park’s entrances and securing the grounds, the park’s 33,863 “relevant personnel” — both guests and employees — were subjected to mandatory nucleic acid testing before being allowed to depart.

None of the people linked to the probable epidemic tested positive for the coronavirus, according to a notice (in Chinese) published this morning by the Shanghai office for coronavirus prevention and control. Despite this, they were required to take a second test after 24 hours of self-isolation and complete 12-day self-health monitoring.

The park and Disneytown will remain closed on Monday and Tuesday in order to “follow the requirement of pandemic prevention and control,” the resort said in a statement today. “We apologize for the inconvenience and will provide a refund or exchange for all guests impacted during this period,” it stated, adding that a reopening date would be announced at a later time.

The unusual events prompted by the COVID scare, which saw hundreds of people dressed in full medical hazmat gear show up at the amusement park on what was supposed to be a joyful Halloween night, were documented in a number of videos and photos taken by park visitors.

Swarms of tourists, many dressed in Halloween costumes, are seen queuing up in front of improvised testing sites while fireworks light up the sky over the park’s centerpiece, the Enchanted Storybook Castle, in a video (in Chinese) that has been making the rounds on Chinese social media. Two health staff are seen in another viral video (in Chinese) performing a mouth swab on a young child who had never undergone a COVID test before.

While the fast lockdown and related measures may appear draconian and autocratic to those outside China, on Chinese social media, there was a surge of support and understanding for the response. Many commentators praised the speed with which local officials and the park handled the incident, claiming that mass-testing over 34,000 people in just a few hours was an outstanding effort that was important for public health reasons.

Others commended Shanghai’s sensible practices, such as prioritizing pregnant women in swab lines and dispatching 220 special buses to transport visitors home while the mass testing lasted until midnight. As the coronavirus pandemic ravaged the country in January 2020, Shanghai Disneyland became the first Disney Park in the world to close. Then, in May, it was the first to reopen its doors, but with COVID-19 safety standards in place, including capacity limitations and face mask regulations.

As per Supchina, China’s zero-tolerance stance on coronavirus infections is exemplified by Sunday’s impromptu mass-testing drive. While many countries are gradually reopening international crossings and learning to live with the virus,

China is determined to eradicate COVID-19 from the country, keeping to its game plan of closed borders, abrupt lockdowns, and repeated disruptions of social and economic activities. Coronavirus fears have risen in recent weeks as a new outbreak emerged across the country, bringing the total number of COVID-19 cases to 92 on Monday.