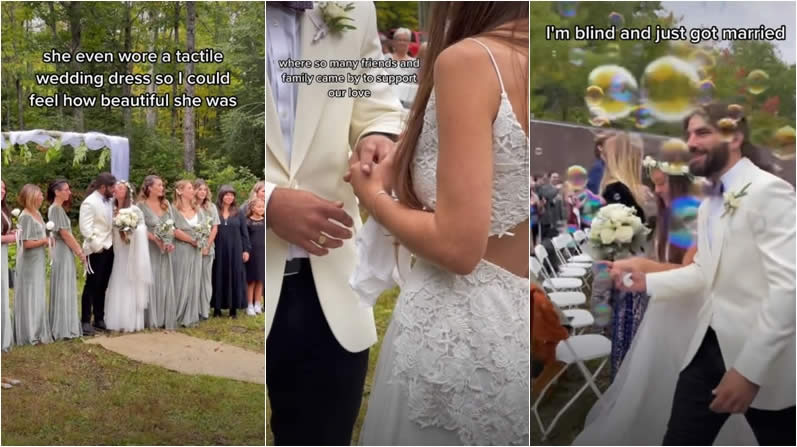 It’s easy for sighted people to forget that beauty isn’t just for the eyes to enjoy. It can also be heard, smelled, and felt. This was evident at Anthony and Kelly Anne Ferraro’s wedding on October 2.

Anthony is a blind Paralympian who won gold at the 2018 USA Judo National Championships for the Blind and Visually Impaired. He’s also a talented guitarist and a motivational speaker.

Kelly Ann wanted her husband to experience her in a beautiful gown, so instead of having one design that was attractive to the eye, she contacted Loulette Bride to have one made that felt amazing to the touch.

“Kelly really wanted to … make it really special for me,” he told Newsweek. “She went above and beyond” to find the wedding dress, which was made “tactilely pleasing” with the use of chiffon, lace, silk, and velvet.

The dress features a lovely fringe on the arms, which made her look angelic when she waved her arms. It most likely feels amazing as well.

A traditional wedding does not allow the husband to see the bride in her gown until she walks down the aisle. He wasn’t allowed to touch the dress until that magical moment at the Ferraro wedding.

“She wouldn’t let me know anything about it until she came down the aisle and I got to touch it, so it was incredible,” he said. “It was so beautiful to me … I could picture her in my head perfectly,” said Ferraro.

“The textures are everything,” said Ferraro. “I see through my fingers, and through my hands, and through … touch.”
A video of Anthony’s wedding that he posted on social media went viral because people enjoy the idea that beauty isn’t just about what we experience with our eyes. It has had over 550,000 views since it was posted on October 13.
The dress was described as “the sweetest thing ever” by one commenter.

After being introduced by friends, the pair met in 2018. When they first met, Anthony told USA Today he felt an “instant connection.” Kelly Ann was inspired by their relationship to learning how to make a safe living space for Anthony by placing bubble wrap or pillows over sharp objects in the house.

She also learned to appreciate his love for the feel of soft materials like velvet.

Studies show blind people have enhanced senses of hearing, smell, and touch. Researchers from the Society for Neuroscience discovered that blind people can process touch sensations faster than sighted people.

“Our findings reveal that one way the brain adapts to the absence of vision is to accelerate the sense of touch,” Daniel Goldreich, PhD, said according to Science Daily. “The ability to quickly process non-visual information probably enhances the quality of life of blind individuals who rely to an extraordinary degree on the non-visual senses.”

Kelly Ann’s wedding gown was an exceptionally thoughtful gift for her husband on their wedding day. It also sends an important message to the rest of the world. Every couple is unique. Every individual is unique. But as we expand our horizons and learn to see the world through the eyes of others, we might discover beauty in unexpected places.