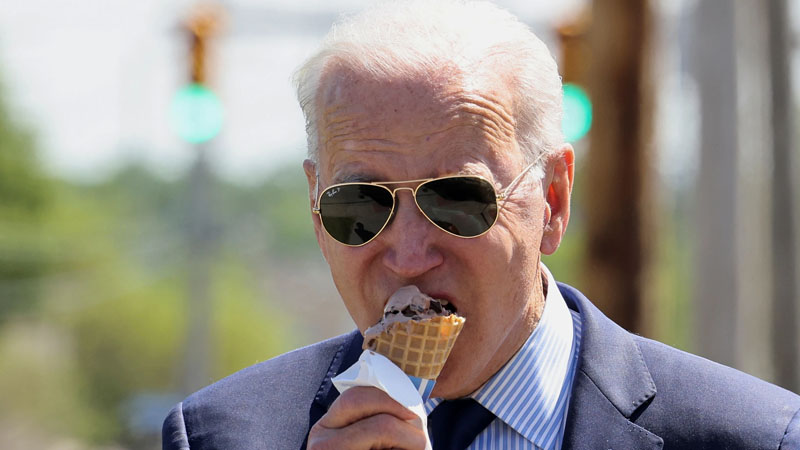 ‘Well, let’s see, um, this morning I think he had some policy meetings … ‘

Maybe there’s a method to his madness, or Joe Biden is completely out of touch with reality.

How else can the president of a world superpower, facing record-low poll numbers and record-high crime and inflation, dither away a day with boutique shopping, eating ice cream, and causing a health crisis with an unmasked face to be explained?

That’s pretty much how President Brandon spent his entire Tuesday, with a schedule so devoid of content and significance that White House spokesperson Jen Psaki appeared as confused, addled, and out of touch as her boss.

“Well, let’s see, um, this morning I think he had some policy meetings, uh, also a PDB meeting,” Psaki said when a reporter asked why there was only the routine presidential daily briefing on Biden’s agenda.

“There are some days that we spend some time doing internal meetings and discussions, uh, with policy experts, with policy leaders, um, and that’s what’s happening today,” she floundered.

President Mandate is the only maskless miscreant slobbering around the ice cream parlor — er, meeting room where many internal meetings and discussions were taking place as part of Biden’s busy day.

Psaki had remarked that Biden’s agenda was stacked with high-level brain sessions that churned for hours with intense work and bursts of inspired energy. Or perhaps a field trip to a store that sells RBG coffee mugs and Kamala Harris over mitts.

And that was the day., barring any unlogged naps.

The extra minute added to Biden’s busy day must have been when all the serious work got done, like foreign policy strategizing, which President Two Scoops did, talking tough to Putin again, but this time with what appears to be a Kamala coffee mug in his hand and standing in the middle of a woke Capitol Hill boutique shop called Honey Made.

Moscow’s laughter can most likely be heard all the way in Kiev.

A theme and sentiment that was shared by Donald Trump Jr.