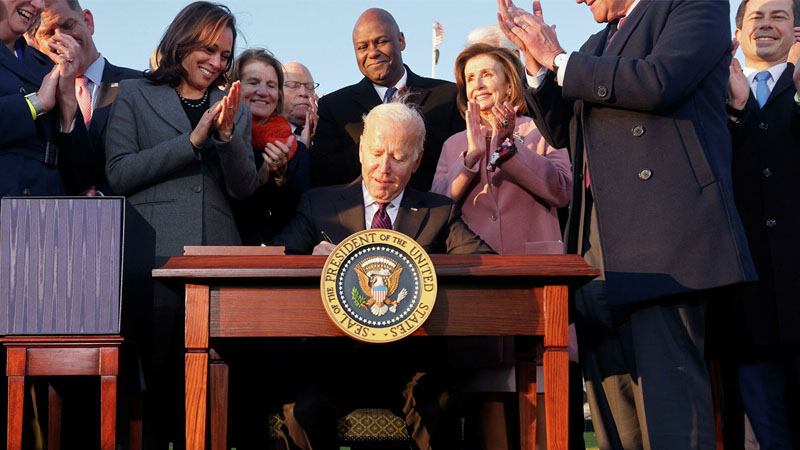 US President Joe Biden put his pen to paper on Monday and signed into law a $1 trillion infrastructure bill that’s key to his post-COVID-19 economic rebuilding agenda.

“Too often in Washington, the reason we don’t get things done is that we insist on getting everything we want. With this law, we focused on getting things done,” he said in comments ahead of the signing, which took place outside on the White House South Lawn. “We compromised. We reached a consensus. That’s necessary.”

The Infrastructure Investment and Jobs Act will set aside huge amounts to invest in projects ranging from transportation improvements and maintenance to expanding broadband internet and replacing aging lead water pipes, among others.

That includes $110 billion for roads and bridges, $66 billion for railroads, $39 billion for public transit systems, $65 billion for broadband expansion, and $55 billion for water system repairs. The program’s cost is calculated across a five-year period.

“For 50 years, the nation has been waiting for the Federal government to provide Amtrak with the resources we need to fully deliver on our mission to serve the American people. The Bipartisan Infrastructure Deal fulfills this promise and we are ready to start rebuilding and expanding passenger rail to meet the service demands and sustainable transportation goals of the future,” Tony Coscia, the board chairman of Amtrak, the US state-owned enterprise that provides the country’s only national passenger rail service, said in a statement after the bill was signed.

“With the signing of this bill today by President Biden, the second great passenger rail revolution is here – and Amtrak and its state and federal partners are ready to lead the way,” he added.

The bill passed the House more than a week ago, but Biden was overseas at the UN climate conference in Glasgow, UK. Its larger cousin, the Build Back Better Act (BBBA), remains in tight negotiations over its disputed cost, which presently totals $1.85 trillion.

For months, Democrats had hoped to hold a vote on both bills together, counting on Republican support for the infrastructure bill to pressure them into supporting the BBBA, a bill that would expand what Biden has called the “care economy” with programs such as paid parental leave, but late last month, Biden relented on that plan and the infrastructure bill was passed separately.

World Reacts to Russia Recognising the Independence of Donbas Republics

Kamala Set To Fight with Team Biden With The Photo to Back it Up: Reports