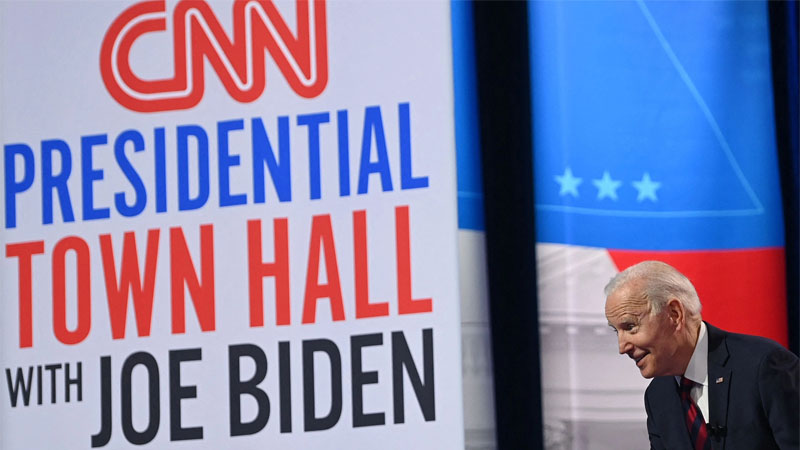 CNN said Tuesday it was “still working” on finalizing which Baltimore venue will host its town hall broadcast Thursday with President Joe Biden. It will be the Democrat’s first visit to the city as chief executive

The network is contacting local organizations to solicit questions for Biden during the 90-minute broadcast hosted by anchor Anderson Cooper. Cooper also will ask questions of his own.

“CNN reaches out to a broad range of civic, business, and political groups to solicit their questions,” the cable news network said in an email reply to Baltimore Sun’s questions. “Attendees are chosen from the pool of people from the groups who expressed interest in attending and submitted questions.”

The attendees “will be a mix of Republicans, Independents, and Democrats,” the network said. Among those invited to pose questions are students and faculty members at Morgan State University, the historically Black university in Northeast Baltimore.

On Tuesday morning, the university sent a campuswide message soliciting questions to be sent directly to a private network portal, said Morgan State spokesman Larry Jones. If a student or faculty member’s question is picked, the network will provide an invitation to the site, Jones said.

“I think the intention would be to ask the question in person,” he said. Johns Hopkins University was also contacted. “We are one of many area institutions that CNN reached out to in advance to make sure local people had a chance to participate,” said university spokeswoman Jill Rosen.

An email from HopkinsLocal, a university economic program, invited recipients to submit questions “on the economy, the President’s two proposals before Congress on infrastructure and social spending, along with other pressing issues of the day.” The email said only “a limited number” of seats were available. Rosen said Hopkins itself was neither hosting the event nor affiliated with it.

The town hall is Biden’s third since assuming office in January. The last one, in July, was held at Mount St. Joseph University in Cincinnati. Spokespeople at Morgan State and Goucher College said neither school had been asked to host the event. Representatives at Coppin State University did not respond to questions about the visit.

The event comes during a pivotal period in the Democrat’s presidency. He is seeking agreement with lawmakers on legislative packages on social spending, climate change mitigation, and infrastructure. The bills are key pieces of the first-term president’s agenda. Members of his party have split over the scope of the social spending that is part of Biden’s “Build Back Better” agenda.

“I do think this is a very important moment in the Biden presidency — the next four or five weeks — with respect to the president’s domestic agenda,” said Sen. Chris Van Hollen, a Maryland Democrat.

Congressional Republicans say Biden’s agenda relies too heavily on increases in corporate taxes, which are the lowest they’ve been since the early 1940s. Biden also is negotiating with members of his own party over the scope of the multi-trillion-dollar package.

“Democracy is a tough business, and he’s a tough guy,” said state Sen. James Rosapepe, a Democrat who represents Prince George’s and Anne Arundel counties and was the Maryland co-chair of Biden’s 2020 presidential campaign. “What you’re seeing is exactly what Biden said he would do: use all of his skills and energy to bring people together to do big things for working people.”

Baltimore has served frequently as a backdrop for presidential visits and is particularly apt as Biden is pushing to spend more on transportation, expand health care coverage, cut prescription drug prices, provide aid for families caring for children and elders, and more.

Baltimore “is a great place to highlight the investment in bricks and mortar — we have bridges, railroad tunnels, the port — and also the investment in families,” said Maryland Democratic strategist Martha McKenna.

Biden was scheduled to last March to visit the Emergent BioSolutions plant in East Baltimore. But he canceled the trip at a time when the company was struggling with COVID-19 vaccine production troubles. He visited Johns Hopkins Medicine as vice president in 2016 to highlight the hospital’s cancer research.

Vice President Kamala Harris toured a mass COVID-19 vaccination site at M&T Bank Stadium in April to mark 100 days after she and Biden were sworn on Jan. 20.

Former Republican President Donald Trump visited the city in September 2019 to speak to a gathering of U.S. House Republicans at a Harbor East hotel and again on Memorial Day in 2020, to speak at Fort McHenry. Republicans also used historic Fort McHenry as a backdrop during the Republican National Convention.

Thomas Markle blasts Meghan and Harry: ‘Everything they do is for money’