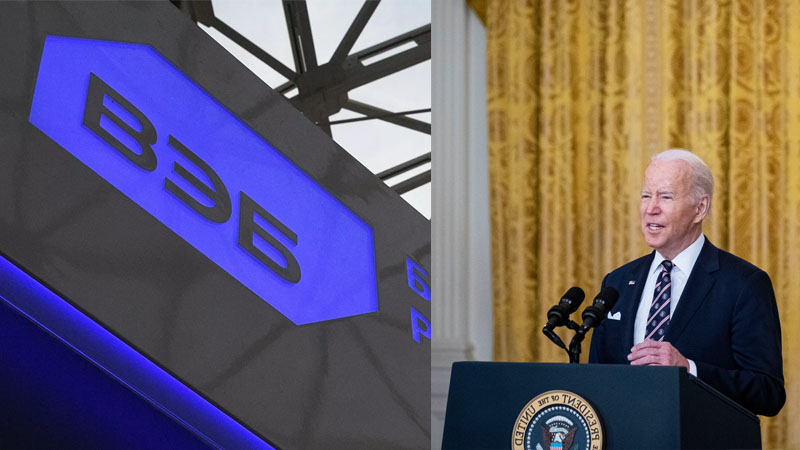 US President Joe Biden said on Tuesday that he was imposing the first tranche of economic sanctions against the Russian Federation in response to Moscow’s recognition of the Donetsk and Lugansk People’s Republics and deployment of peacekeeping forces to the Donbass.

“Russia just announced that it is carving out a big chunk of Ukraine,” Biden said on Tuesday, saying Russian President Vladimir Putin was “setting up a rationale to take more territory by force.” “This is the beginning of a Russian invasion of Ukraine, as he asked permission for in his Duma,” he continued.

“Who in the Lord’s name does Putin think gives him the right to declare new so-called countries on territory that belonged to his neighbors?” Biden asked. “This is a flagrant violation of international law and it demands a firm response from the international community.”

The US president announced the first tranche of sanctions against Russia, which target VEB Development Bank, Promsvyazbank Public Joint Stock Company (PSB), and 42 of their subsidiaries; Russia’s sovereign debt; and imposes sanctions on Russian “elites and their families.” He also said he had worked with German Chancellor Olaf Scholz to ensure that the Nord Stream 2 gas pipeline, which would have brought liquefied natural gas from Russia to German, will not open.

“We are implementing comprehensive sanctions on Russian sovereign debt. That means we have cut off Russia’s government from Western financing. It can no longer raise money from the West and cannot trade in its new debt on our markets or European markets either,” Biden said.

“Today’s actions, taken in coordination with our partners and allies, begin the process of dismantling the Kremlin’s financial network and its ability to fund destabilizing activity in Ukraine and around the world,” US Treasury Secretary Janet Yellen said in an Office of Foreign Assets Control (OFAC) news release announcing the details of the new sanctions.

“We continue to monitor Russia’s actions and if it further invades Ukraine, the United States will swiftly impose expansive economic sanctions that will have a severe and lasting impact on Russia’s economy,” she added.

The sanctions are slated to take effect beginning on Wednesday. Biden said the US was prepared to implement sanctions “far beyond” those in 2014 if Russia attacks Ukraine.

He also revealed that US troops would be shifted from elsewhere in Europe into the Baltic States in response to Russian troops remaining in Belarus. Estonia, Latvia, and Lithuania are all members of the NATO alliance.

Citing a US official, Reuters reported that this included 800 troops from Italy, 20 Apache attack helicopters presently stationed in Germany, and 12 Apache helicopters being sent to Poland from Greece.

“When all is said and done, we’re going to judge Russia by its actions, not its words. Whatever Russia does next, we’re ready to respond with unity, clarity and conviction,” Biden said. “I’m hoping diplomacy is still available.”

Kremlin spokesperson Dmitry Peskov told reporters afterward that Putin did not watch Biden’s speech, as he was in a working meeting at the time. On Monday, Putin announced he was moving to recognize the independence of the Lugansk People’s Republic and the Donetsk People’s Republic, two breakaway states in the Donbass region that declared independence from Ukraine in 2014, following the US-backed coup in Kyiv.

He explained on Tuesday that the Minsk Protocol, which was supposed to lead to peace in the Donbass conflict, had long been killed by Kiev, which refused to implement the deal reached with Russia and the Organization for Security and Cooperation in Europe (OSCE).

The decision came as Ukrainian forces dramatically escalated their attacks on the Donbass republics last week, sending tens of thousands of civilians fleeing to safety in Russia’s Rostov region. However, the US claimed the attacks were fake and part of a provocation planned by Moscow to justify intervention in Ukraine.

The attacks came in the larger context of NATO claiming that Russian troops drilling near the Ukrainian border were preparing an invasion of Ukraine. Moscow has denied any intent to invade, but said that the situation would be considerably less tense if NATO took certain actions to respect Russia’s security concerns, including halting its eastward expansion, writing off letting Ukraine join the alliance, and promising not to station offensive weapons near Russia’s borders.

‘Women Were Disposable’: Ex-Playboy Employees Allege They Were Sexually Assaulted in Docu-Series