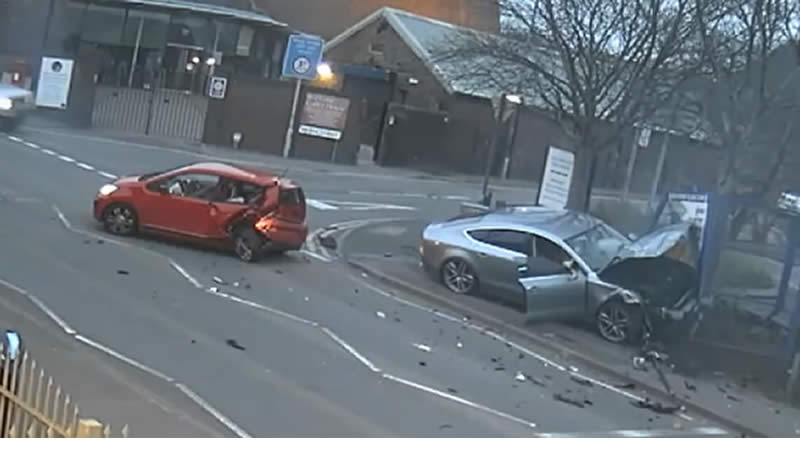 The moment a speeding Audi driver ploughed into the back of a trainee driver before leaving the scene on foot is captured on shocking video.

On Tuesday in Stourbridge, West Midlands, CCTV cameras showed an Audi driver smashing into the rear of a red VW when it was stationary and indicating a right turn.

The force of the accident drives the VW into a van, spinning it several times in the road, while the Audi clashes with a fence and advertising signage.

As members of the public rush to help, the male driver of the Audi can be seen quickly exiting the vehicle before leaving the scene. The Audi’s passenger also flees.

At around 6 p.m., emergency services were called to the crash scene on Camp Hill near Worsley, but no serious injuries were confirmed.

A West Midlands Police spokesperson said: “The road was closed following the collision. The driver of one vehicle fled the scene.

“A woman was taken to hospital with injuries not believed to be too serious.”

A witness, who did not want to be named, added: “The Audi driver then came flying over the bridge and tried to brake but by then it was too late and he just smashed into the back of the other car.

“A couple of people tried to run after him when he tried to leg it but I don’t think they managed to catch up.

“It’s incredible nobody was badly hurt, it could have been a lot worse. Both cars were a right mess.”

“Upon arrival, we found a man who was the driver of the first car.

“He was assessed at the scene and had sustained injuries not believed to be serious.

“He received treatment on scene and was conveyed to Russell Hall Hospital for further assessment. No further patients require assessment.”

A West Midlands Fire Service spokesperson added: “This was an RTC which involved two cars and a van which had been in a collision on a roadway.

“We made both vehicles safe and one appliance left the scene at 7 pm and the other at 8.26 pm. We did not use any specialist equipment.

“We made the vehicles safe and they came to rest on all fours.”