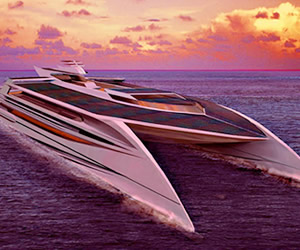 Solar;
70KW Marine solar cell array charging a 2MW Lloyds approved Lithium UPS for Zero Carbon cruising at up to 14 knots or as a power booster.

The most economical Hybrid Cruising Speed of 18 knots is achieved by employing only one Genset in conjunction with Solar, Wave and Wind power

Propulsion Drives
2 Rolls Royce 1.5MW Waterjets in each of Ocean Supremacy’s wave piercing hi-speed displacement hulls. Each can be driven by the parallel MTU/ZF hybrid motors utilizing the 2MW Lithium UPS and or the 1MW Tier 4i MTU Gensets

The 2 Retractable Anerson Surface drives located in the demi-hull can be driven by the Siemens motors powered by the 2xV16 Tier 4i MTU Gensets and or the 2MW UPS.

Hybrid Green Power Advantages
The 42 meter Ocean Supremacy is more than twice as fast as most Superyachts yet consumes half as much fuel and produces less than half as much GHG emissions by employing a diversity of renewable power sources
The ability to shutdown 1 to 6 of her Tier 4i diesels allows her to achieve the very highest level of efficiency with the lowest rate of consumption at virtually all speeds.

Optimizing Hydrodynamic Efficiency
The Hydrodynamic efficiency of hi-speed wave piercing SuperCats is clearly indicated by their incredibly small wave making signatures.
This visible difference points to why the power requirements of Ocean Supremacy are 30% less compared to conventional hi-performance Superyachts. Ocean Supremacy enhances this inherent advantage by providing efficient Power on demand via variable sources matched to a variable as well as a drag free retractable drive system.

Optimizing Aerodynamic Efficiency
To minimize the effects of drag, Ocean Supremacy’s aerodynamic form is optimized in a Wind Tunnel to insure that a lamina flow is maintained from bow to stern where foils are employed to eliminate the extreme turbulence and drag associated with the vast majority of conventional Superyachts.
A true State of the Art Superyacht

Richard Sauter commented. “Ocean Supremacy is the first Cutting Edge, no compromise Eco Luxury Superyacht of her kind. Operating with renewable sources of energy, she combines the advantages of reserve power for emergencies, more comfort in rough seas, more space for entertaining and the privilege of Total Independence which comes from having an Unlimited Zero Carbon Cruising Range”
.
Carbon Neutral
As a Certified Carbon Offset Project, Ocean Supremacy can save on average 4,000 tons of CO2 per year. Plugged in to shore power she is capable of feeding 200+Mwh’s of electricity to the grid, enough energy to offset an annual Carbon Neutral Cruising Range of 3,600nm at 18knts.

Luxury Onboard Environment
The main and upper Sun Deck with Pool Area gives incredible flexibility for a number of uses such as Sunbathing, Dancing, Parties, Entertaining and Events. The upper deck has an outside cockpit that is protected from the sun and rain by a Photovoltaic Canopy and also features an open-air outdoor Cinema with a retractable Giant Flat-screen that can be viewed by over 20 Guests. 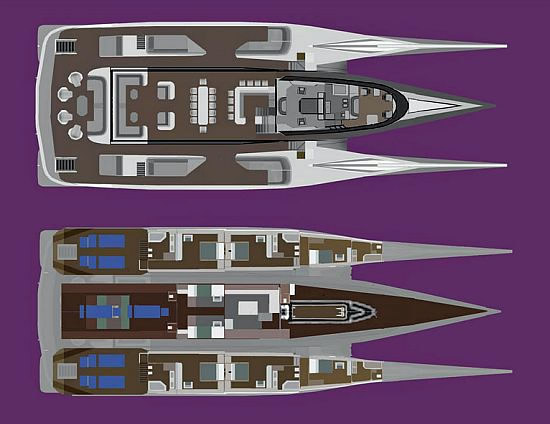 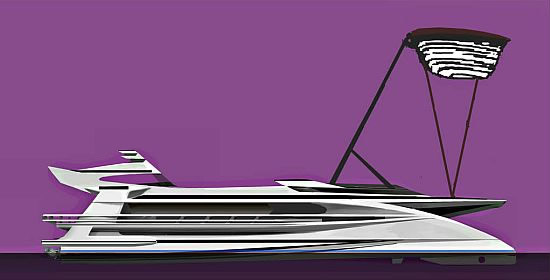 Fashion Networking – The Easiest Way to Promote a Fashion Business

Yacht Zahraa is the mother lode of all Stylish Cruisers