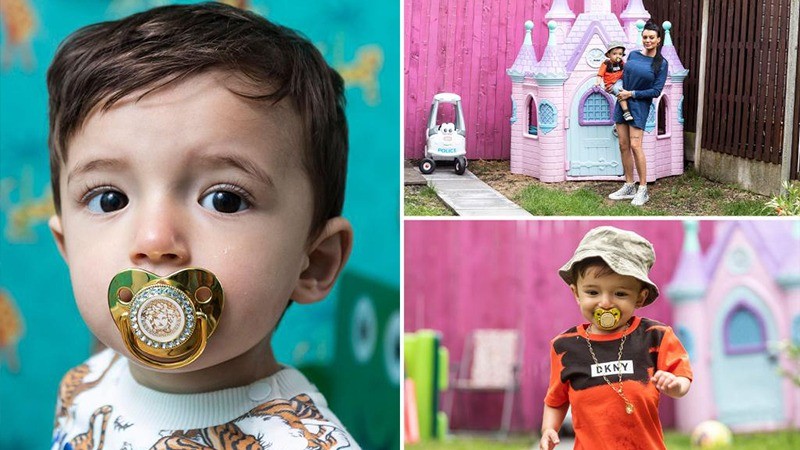 Peek-a-boo, this child is rocking Versace and Gucci as well.

With an $1,100 diamond-encrusted bracelet on his wrist and a $1,200 solid-gold pacifier in his mouth, a one-year-old bundle of bling named Jareem is obsessively pampered by his single, unemployed mother Kasey Akram, who would happily “walk around naked” to ensure her tot has “whatever he likes.”

“As soon as I had my little boy, my obsession changed from how I looked to focusing on my son,” Akram, 32, explained to SWNS.

“What Jareem wants Jareem gets — the last pair of shoes I bought myself were [$1.21] Primark flip-flops and on the same day I bought him Gucci [sneakers],” added the former model-turned-mom, from Sheffield, South Yorkshire, in the UK.

The pampered baby frequently wears a $900 Versace chain along with his collection of expensive jewels—at least the expensive things he hasn’t yet tossed—in addition to his luxury sneakers.

“I spent [$1,200] on a solid gold [binky] and he chucked it in the middle of town and lost it, I cried for three days,” said the over-indulgent mom of one. Over the past year, she’s also shelled out a whopping $240 to have baby Jareem’s palm read in order to learn his favorite color.

“Whatever he likes, he gets. And if I can’t afford it I ring his dad and get the money,” said Akram. “I’m not working at the moment, I do all this on benefits and the help of my ex-partner.”

As per The New York Post, Akram — who admittedly didn’t want kids prior to the COVID-19 outbreak — became pregnant with Jareem in 2020. And she’s since lavished the boss babe with expensive clothing, extravagant accessories, and luxurious accommodations.

“Apparently I’m too soft with him, but if you had a child in the middle of the pandemic you would be the same,” said the obliging brunette, who bathes her lucky little one in a tub of milk and honey several times a week.

Jareem is also given an all-organic meal every morning at 6 a.m. in his $363 designer bed, which is followed by a wonderful showing of “Peppa Pig” on the TV that Akram relocated into his bedroom from their living room and a relaxing baby oil massage.

The pampered prince’s palate is just as refined as his everyday routine.

“He’s never seen a slice of white bread in his life and what I eat he eats — he likes olives, he likes grilled peppers,“ said the servile mom. And Akram, fearing certain chemicals in tap water might cause her baby to sprout breasts, will stop at nothing to ensure Jareem’s water supply is purified.

“He’s never drunk tap water in his life,” she boasted. “I [fired] my nanny because she gave him tap water.”

The boy’s every demand is happily fulfilled by Akram, who cheerfully gives Jareem stylish haircuts and mini pedicures, although some of her friends disagree with her obsession with spoiling the child rotten.

“He’s the loveliest little boy in the world and I’ve fallen out with friends over how much I’ve spent on him,” she said, confessing that when her bed broke she’s slept on a mattress on the floor and purchased Jareem a bed frame shaped like a tractor.

“If I want to spend the money on my son that’s my choice,” Akram insisted. “I don’t care if I walk around in Primark shoes as long as my prince has the best.”
And the catering mother plans to baby Jareem for the rest of his life— even after he is all grown up and marries.

“His dad always says that when he turns 18 he’ll get a girlfriend and move out but I say, ‘No, we’ll have bunk beds when he’s too old to share a bed with me,’” said Akram.

“I always ask [Jareem] if he gets a girlfriend when he’s older and she doesn’t like me if he’ll kick her out, and he says, ‘Yes,’” she gushed. “When he finally gets married his wife is going to hate me.”