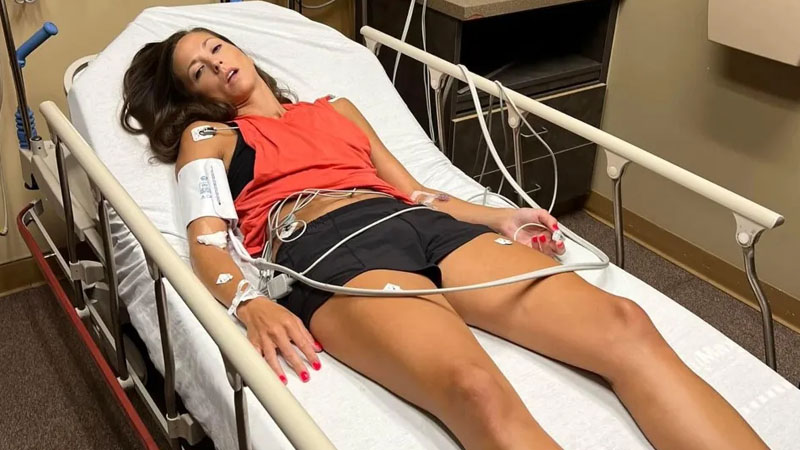 At the McDonald’s on Highway 70, Renee Parsons claimed she picked up a $1 bill from the ground and soon passed out.

“She looked like she was dying. She certainly was unconscious and very pale,” her husband Justin told News 2.

Renee Parsons’ body started to feel numb and she felt like she couldn’t breathe a few minutes after picking up the dollar bill.

Parsons explained, “I couldn’t even breathe. It’s almost like a burning sensation, if you will, that starts here at your shoulders, and then it just goes down because it’s almost like it’s numbing your entire body.”

While he was driving to the nearest hospital, according to Justin Parsons, his wife’s speech started to become slurred before she went unconscious. “I grabbed my husband’s arm with the same hand that I had the money in and said, Justin please help me, it won’t stop it’s getting worse.”

Soon after her husband felt side effects as well. “My lips started going numb and my arm broke out in a rash,” Justin Parsons said.

While Renee’s symptoms persisted for almost four hours until she was freed due to an accidental overdose, his symptoms remained for around an hour.

The family claims that although the toxicology result does not check for synthetic substances, they are convinced that fentanyl or a similar drug was on the money.

“I just want people to know because it could have been a child,” said Renee.

One day later, she is grateful and making plans to quickly complete her Narcan training.

As per myfox8, the family claims the Metro police officer who arrived on the scene informed them that the dollar note had probably been used to cut or store drugs.

The dollar bill was taken to the property room on Monday afternoon and burned because, according to a representative for Metro Nashville Police, there were no grains on it.

In June, Perry County Sheriff Nick Weems put out a warning to the community on social media, that has since gained national attention, about the money with fentanyl found at multiple gas stations.

While speaking with News 2, the sheriff asked the community to educate their children—if they see money on the ground to leave it. “I wouldn’t want my child picking up something like that and then opening it and — inhale it.”

“If you are a child and you pick up a dollar bill that’s full of powder and you put your fingers in your mouth I would I say that would be a big risk,” said Dr. Edwards.

Edwards said, merely touching a drug won’t result in an overdose, but the risk is still concerning.

“You know ingesting something is a different story than touching something. Your skin is a really good barrier and will likely protect you and you won’t just randomly overdose from just any medicine you are touching for a short period of time,” Dr. Edwards explained.

Medical professionals spoke out about the reports of drug-laced money on Tuesday. According to Dr. Caleb Alexander, a professor of epidemiology in medicine at the Johns Hopkins Bloomberg School of Health, “the risks of exposure through the skin are incredibly, incredibly small.”

Dr. Alexander added, “The risk is quite low, but theoretically, yeah, someone could touch it with their skin, and then if they touch their eyes or their mouth or their nose then theoretically, they could have an exposure that way.”

Another Study Links Progression of Alzheimer’s Disease to Oral Bacteria

Mom claims Her Son’s Orange Sneakers Saved Him From the Mississippi River after Barge Crash: “Vincent was stuck underneath”