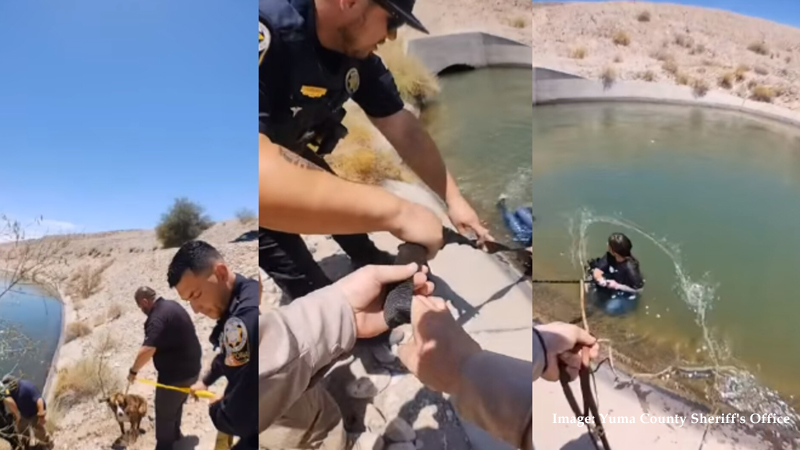 The woman clung to a tree for 18 hours in a fast-moving canal before being rescued by authorities.

Authorities said an Arizona woman and her dog were rescued from a fast-moving canal after she clung to a tree for 18 hours.

The Yuma County Sheriff’s Office released bodycam video from last week’s quick rescue of the woman, who had been about to lose up when she heard the first responders’ wailing sirens, according to police, people.

“Her body told the story of her constant fight,” Wellton Police Sgt. Juan Salcido told KSAZ-TV. “She had abrasions to her arms and legs. She had a sunburn. She looked exhausted to the point she couldn’t stand on her two feet,” he said.

“She was about to give up until she heard our sirens,” Salcido said.

According to authorities, the unidentified woman had been working in the area and had let her dog go free. She went into the canal after her 55-pound dog, who had fallen in and couldn’t get out.

She, too, couldn’t get out of the fast-moving waters at that time.

“The will to survive is what makes this a great story,” Salcido said.

Authorities can be seen in the footage using a rope and a harness to pull both to safety. As she is taken from the canal, the woman can be heard moaning.

The woman received no serious injuries and is recovering with her pet dog, authorities added, despite being weak and unable to stand.

After noticing the woman in difficulty, the conductor of a passing train dialed 911.

“We want to thank everyone involved in assisting with this rescue, including the train conductor who spotted the subject in the water and called 911,” the sheriff’s office wrote in a statement on Facebook.