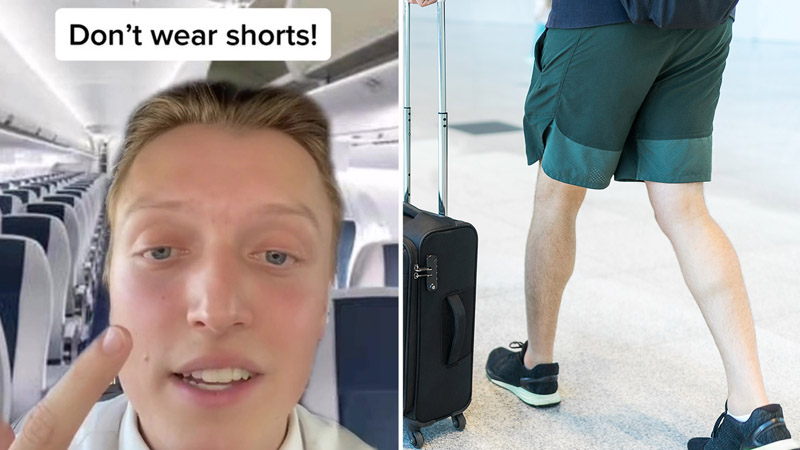 Before sharing advice on sleeping with your head against the window, he adds you should never push the flush button in a toilet. “You are not the only one that has done that and you don’t know how many people or children have wiped their hands or other things all over the window,” he explains.

He continues, “Don’t or try not to wear shorts when you’re on an airplane. When it comes to wearing shorts, he gave a similar warning about hygiene.  “It’s the same thing as the window – you never know how clean it’s going to be, so if you have pants, you’re going to have fewer germs.”

Other suggestions included drinking lots of water and informing a flight attendant if you feel sick. “Don’t forget to drink water. Stay hydrated. You want to have about 16oz for every flight that you go on, so keep that in mind.

“Don’t feel afraid to let a flight attendant know if you’re feeling sick. So if you need food, water, or an air sickness bag, please feel free to let us know.”

Watch the full video below.

Users reacted immediately to the viral video, which has received millions of views and thousands of likes. Some questioned his suggestion, claiming that if the airplane was properly sanitized between flights, there would be no need for what he claimed.

“This just proves you don’t clean after a flight,” wrote one user, with a second asking – “wait – why don’t you clean these areas?” A third posted, “aren’t you SUPPOSE to clean these areas – isn’t that your job?”

Matt Gaetz Will Be ‘De Facto’ Speaker After McCarthy Concessions