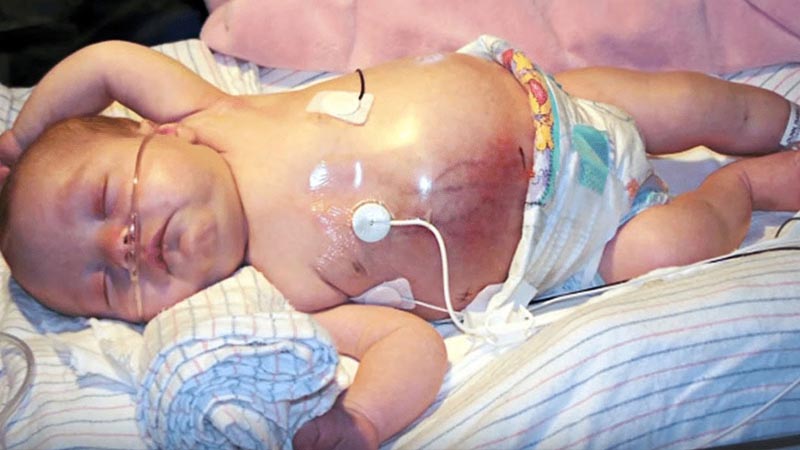 Most new parents’ greatest fear is worrying about their baby’s health and hoping for no health complications. In today’s story, Elisa and Michael Dunn, a couple expecting their first child, are featured. They were taken aback when they found they weren’t just having one baby, but twin baby girls!

That is, until one glum September day when the twins went in for a routine check-up with their doctor. During the exam, the doctor noticed Madeline’s stomach bulging and something didn’t feel right when he pressed on it! The doctor examined an ultrasound image and found a visible growth. The doctor had to tell the bad news to the Dunns…

According to what he saw on the ultrasound, baby Madeline may have a tumor or cancer! He made reference to a specialist to have her belly examined further. They took blood tests, collected samples, and performed all necessary testing. Then came the scary diagnosis. The doctor informed the Dunns that their precious baby girl had a rare type of cancer known as Stage 4s Neuroblastoma. As if this wasn’t bad enough, the specialist suspected Isabella, her twin sister, had something similar and asked her parents if he could examine her as well.

That’s when the Dunns were hit with a double dose of bad news. Both of their daughters had Stage 4 Neuroblastomas the size of a softball growing off of their adrenal glands. The doctors informed them that it is extremely rare for twins to have same cancer at the same time. However, in this case, they suspected that the initial cancer cells multiplied and duplicated inside Madeline’s womb and were passed on to her sister Isabella.

They reasoned that because they were identical twins, they must have shared certain blood vessels and arteries while still in the womb. These vessels would serve as passageways for cancer cells to travel from one baby to the next. A successful surgery would be impossible because cancer began months before they were born and spread from their kidneys to their livers.

Both of the girls’ livers were now filled with tumors, and their fate was not known. The doctors were unsure whether surgery would be beneficial, and neither twin expected to survive. So they decided on Chemotherapy as the next best thing.

Chemotherapy can have serious side effects for an adult or an older child in general, but the side effects for a baby this young would be much worse. Their parents were terrified and horrified, but they chose chemotherapy because doing nothing was simply not an option!

During the first round of chemotherapy, both girls started treatment separately. They were both suffering from terrible side effects from the treatment. The girls were reunited after the second round of chemo.

They both went through four arduous, long, and painful chemotherapy sessions before having an MRI two weeks before Christmas to see how they had responded to the treatment. Isabella and Madeline’s cancer had both gone into remission, and there were no signs of cancer in their systems!

Luckily, their rare cancer remained in remission and never came back! The girls are still checked every six months to ensure that everything is still in remission. The twins are now healthy and growing up normally like any other kid.