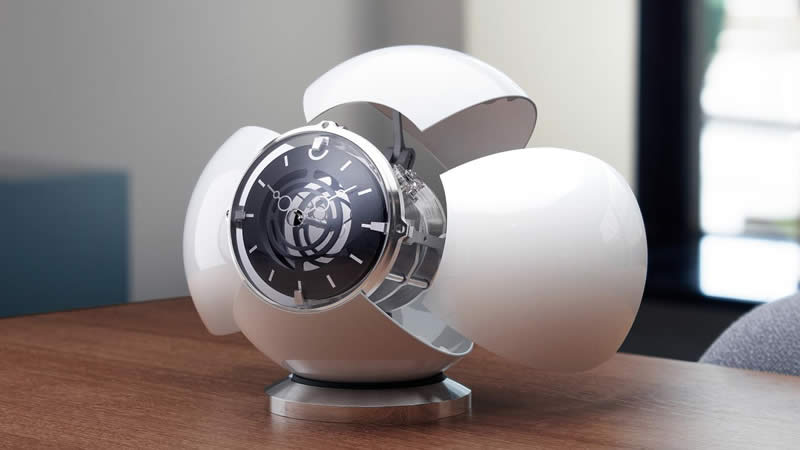 A neatly designed sphere, revealing an hour-striking mechanism; the first chiming function to be released within the creative art line.

The ORB is protected by 4 beetle insect-inspired elytras that can not only be opened to reveal the inside of the clockwork, but also to polymorphise this kinetic sculpture in a variety of ways.

Designed by German designer Maximilian Maertens and developed by L’Epée 1839, Orb’s minimalistic structure is composed of four elytra that not only open up, but can also swivel like a transformer to display the Orb in a variety of different positions. The shiny-white version is reminiscent of the first iPods with their lustrous curved cases, a surface that is particularly pleasing to the eye and the touch.

The word orb comes from the Latin orbis, meaning “circle” or “disk”. The word is also the basis of the word “orbit”, a word that has stayed in the modern-day vernacular even if orbits are now known to be elliptical and not at all round.

Orbs are also used today in fan-fiction to mean eyes, as in “cerulean orbs” that designate blue eyes or “chocolate orbs” for brown eyes – a nod to perhaps the first thing that comes to mind when we first lay eyes on the Orb.

During the manufacturing, nothing about this atypical project was easy, L’Epée faced two major challenges. The first was making the sphere in four pieces so that they could be totally transformable, durable, and also form a perfect sphere when closed.

The second significant challenge was developing the striking system. Usually, with a bell-chiming mechanism, gravity is needed to strike the bell. As the Orb’s brass bell can find itself in an infinite number of different positions, L’Epée 1839’s clockmakers incorporated several springs to strike the bell so it can chime even when it is flat. The system is a hybrid between a clock and a watch striking mechanism.