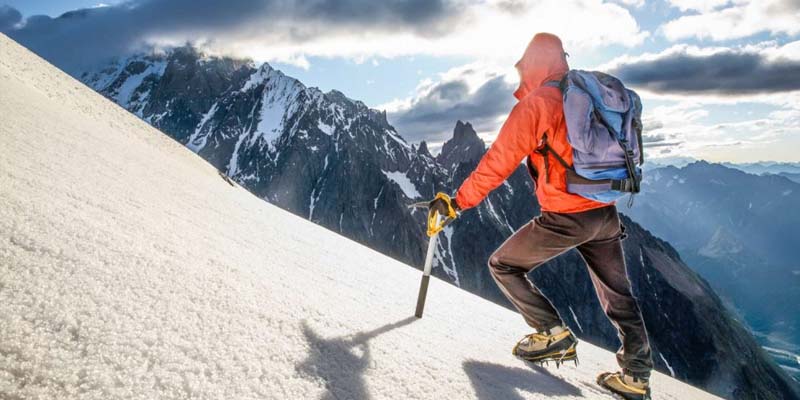 What is the hardest mountain to climb? The more complex the mountain, the more willing ones desire to conquest it. However, complexity does not necessarily mean the height of a mountain. Some mountains may not be so high but very dangerous and difficult to climb. We picked up the 15 most difficult and dangerous mountains in the world.

Alps, the Eiger has earned the nickname of Mordwand, meaning “murderous wall”, a pun on its actual name, Nordwand (North Wall). It might look small and accessible when compared to huge mountains, but its smallness is deceptive. The first ascent of the Eiger was made in 1858 by Swiss explorers, but only in 1938 was its north face climbed. The north face route continues to challenge climbers – it requires immense technical expertise in mountaineering. Look out for the increasing rock and ice falls, and keep 2-3 days in hand for the summit

The Matterhorn is one of the most dangerous peaks in the Alps, with fatalities every year. This is caused by multiple factors: technical difficulty, avalanches, and rock fall, and strangely enough – people! The peak becomes massively overcrowded during climbing season. What’s unique about the Matterhorn is its pyramidal nature and its symmetry. Ever since its first ascent in 1865, it’s become an iconic mountain in the Alps. An important thing to keep in mind is the weather: the region is prone to storms, so plan your trek accordingly. High summer is a good time to head here.

The tallest mountain in Europe, and its prime location between two beautiful countries: no wonder Mont Blanc is so popular with tourists. Over 20,000 people summit this peak every year now, more than two centuries after it was originally climbed. The ascent is not very technically challenging, especially when compared to some other mountains in the Alps. However, there are sections notorious for rockfalls. Moreover, one might get taken in by the apparent ‘easiness’ of the hike, and not have proper equipment or clothing, which leads to fatalities. Another factor: the peak seems deceptively close, but certain routes require ascent over two other 4000m mountains before the final section of Mont Blanc can be climbed.

Mount Elbrus is a dormant volcano in the Caucasus Mountains of Russia. Due to its northern location, it’s extremely cold there, and handling the altitude can be difficult. It is much more difficult to breathe there than if you’re trekking in Nepal or the Andes. Again, the climb is not very technically difficult, so if you have the right gear and the weather is on your side, a hiker experienced with high altitudes should not have a problem. However, most people are complacent with ‘easier’ summits. Bad weather (which causes poor visibility, especially dangerous during descent) and poor acclimatization on part of the climbers lead to multiple deaths every year. So practice your ice axe skills, and look out for storms

Gauri Sankar is a peak in the Himalayas, about 100 kilometers away from Kathmandu, and close to the Nepal-China border. Towards the north is its sister peak, Melungtse. The mountain has two summits; the northern summit (which is higher) is called Sankar while the southern summit is called Gauri. Nepal opened up to tourism only in 1950, so the first attempts to climb Gauri Sankar were in the 50s and 60s, but the steep ice faces on all sides and bad weather made the expeditions unsuccessful, and it was only in 1979 that climbers reached the top. The route requires incredible technical skills to reach the top of the ice face, let alone to reach the summit. Even now, there have been only a few successful mountaineers who have managed to do it.

Melungtse lies north of the Nepal-China border, in the Tibet Autonomous Region of China. Gauri Sankar is better known since it is visible from Nepal, but Melungtse is perhaps even more treacherous. After a few failed (and illegal!) attempts, Melungtse was finally scaled in 1992. And it hasn’t been conquered since – although there have been a couple of attempts. The reason is partially its inaccessibility, but it is also an incredibly steep mountain. The steep faces make it much more difficult than the elevation would suggest.

This peak in Pakistan’s Karakoram Range has such a difficult climb that only three times have expeditions reached the top.. Also known as ‘The Ogre’, the mountain is known for its steepness and rough, uneven cliff; its terrain is much more difficult to traverse than most Karakoram peaks. The first successful ascent was made in 1977, and even then, the climbers almost died during the descent. 21 years passed before another expedition was able to summit the granite tower. It is the combination of high altitude, steepness, unpredictable weather, and its proximity to the Uzun Brakk glacier that make the climb especially dangerous. You have to walk under unstable ice walls and traverse ice slopes before the actual summit!

This peak is a western outlier of Kanchenjunga and is connected to it by a long ridge. It was first climbed in 1962 from the southeast ridge. This mountain is well known for its climbing challenge. Not only is the elevation high, but the climb is particularly steep near the summit. The north face (ominously called the “Wall of Shadows”) saw its first ascent only in 1976; even then, the team avoided the steep headwall at the top of the face, choosing instead to go around it. In 2004, the direct face was finally climbed using big-wall aid techniques.

The Gasherbrums are a remote group of mountains located in the Gilgit-Baltistan region of Pakistan. They are part of the Karakoram Range, and contain three of the world’s 8000m peaks! Interestingly, Gasherbrum IV was first surveyed as K3 in the 1800s – today, out of the five mountains in the K (Karakoram) series, only K2 retains its name. Gasherbrum IV was first climbed in 1959 but has never seen a winter ascent. Only in 1997 was its high west face (the most visible face of the mountain) climbed. It enjoys its reputation as one of the most difficult peaks to summit because of its height, steepness, and the unpredictable weather in the area.

The Annapurna massif is a 55 kilometer stretch with multiple peaks. A legendary peak part of the elite 8000m club, Annapurna I is extremely popular with the mountaineering community. With a fatality rate of almost 40%, however, the ascent is definitely not an easy one. In 1950, Annapurna I was climbed for the first time. Its south face, considered one of the most difficult climbs in the world, was climbed only in 1970, however. The peak has numerous avalanche-prone regions and unstable ice walls. The climate is also hard to rely upon – a snowstorm can hit anytime, and low visibility immediately escalates the danger of any trek.

Nanga Parbat is the world’s 9th highest mountain and an extremely challenging climb. Located in the remote Gilgit Baltistan region, it is the western anchor of the Himalayas, and sometimes called the Killer Mountain or the Man-Eater because of the fatalities. This peak has the largest (and perhaps most intimidating) rock wall: the legendary Rupal Face on the south side which rises over 15,000 feet! You need both skill and dedication to cross it. Nanga Parbat has never been climbed in the winter, although multiple people have died trying.

The Dhaulagiri massif extends 120 kilometre from river Gandaki to Bheri in Nepal. Dhaulagiri I (the only eight thousander in the massif) is only about 34 kilometre west from Annapurna I, and in clear weather, is visible from north Indian plans! It rises suddenly from lower terrain (7000m from the Gandaki river), and has five ridges and south and west faces. Since 1960, ascents have been made from every direction. The south face, however, wasn’t climbed until 1999 – it requires extensive equipment along with skill and experience. Of course, you also have to keep a lookout for ice avalanches.

Makalu is the fifth highest peak on earth and is only about 20 kilometres away from Mount Everest. It is situated on the border in the middle of Nepal and Tibet Autonomous Region of China and is an isolated peak. It’s considered one of the hardest mountains to climb, perhaps rivaled only by K2. The peak has an incredibly unique structure: it is shaped like a four-sided pyramid. Part of the difficulty was the inaccessibility of the base camp itself, but now the situation is better because of helicopters. Climbing Makalu requires weeks of acclimatization, and one must be experienced with glaciers and seracs. It’s definitely an endurance test!

Lhotse is a peak directly connected to Mount Everest through the South Col – it is part of the Everest massif. Along with the main summit, the mountain also has two more peaks, Lhotse Middle (which wasn’t climbed until 2001!) and Lhotse Shar. The biggest challenge with Lhotse is the altitude: one has to be ready for the over 8000m ‘death zone’. There is also Lhotse face on the western flank, a 1125m wall of glacial ice which rises at 40 and 50 degrees. This must be crossed if you want to reach the South Col. After the face, the route becomes even steeper until the summit point.

The third-highest peak in the world, Kangchenjunga has maintained its high rates of fatality (20%!), when most other mountains have seen a decrease with improved equipment and more knowledge of weather conditions. There are three routes from Nepal, and one from Sikkim in India which has remained closed since 2000 due to its danger. The peak is located along the border of Nepal and India and has one of the deadliest climbs in the world. Unpredictable weather, cold temperatures, high altitude, and frequent avalanches are factors that made ascent so dangerous. Be ready for steep faces and overhanging glaciers, especially during descent.

This Tiny Town on the Southwest Coast of Ireland, Favorite Place in the World