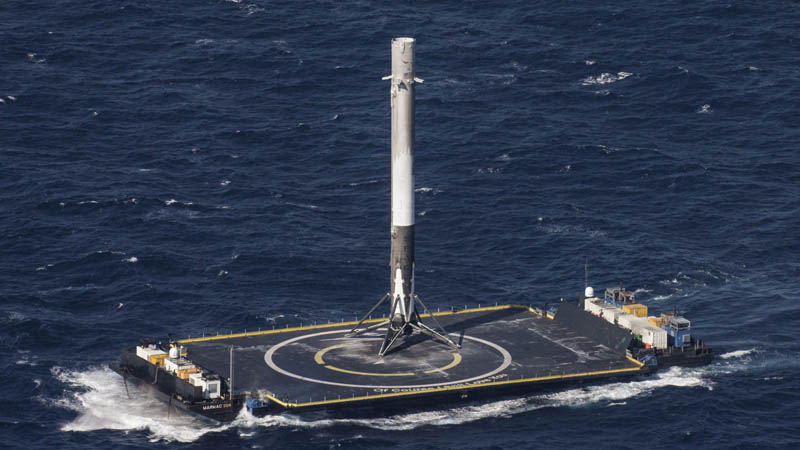 Throngs of local residents, tourists and space enthusiasts turned out at Jetty Park and Port Canaveral to see the booster as it returned from sea.

A tug pulled the drone ship through the inlet leading to Port Canaveral around 2 p.m. EDT (1800 GMT) Tuesday, and mariners carefully maneuvered the drone ship into position for a crane to hoist the Falcon 9 rocket booster off the vessel and into an onshore stand. SpaceX planned to remove or retract the rocket’s landing legs, then rotate the booster horizontal for transport back to Cape Canaveral Air Force Station for further inspections, and likely refurbishment for another launch.

The Falcon 9 rocket lifted off at 3:22 p.m. EDT (1922 GMT) Saturday from pad 39A at the Kennedy Space Center carrying NASA astronauts Doug Hurley and Bob Behnken on a test flight to the International Space Station aboard SpaceX’s Crew Dragon spacecraft.

It was the first time astronauts have launched from U.S. soil into Earth orbit since the last space shuttle launch July 8, 2011.

The first stage of the Falcon 9 rocket switched off its nine Merlin engines around two-and-a-half minutes after liftoff, then detached to allow the rocket’s upper stage to fire into orbit with the Crew Dragon capsule.

The first stage deployed four grid fins for aerodynamic stability, then reignited a subset of its Merlin engines to steer toward a landing on SpaceX’s drone ship “Of Course I Still Love You” a few hundred miles northeast of Cape Canaveral.

A single-engine burn slowed the rocket for the final descent to the drone ship’s deck, and four black landing legs made of carbon fiber extended just before touchdown.

The first stage on the Crew Dragon Demo-2 launch was flying for the first time. The commercial booster sports U.S. flags and NASA logos, both the agency’s iconic blue “meatball” insignia and the newly-revived stylized “worm” typeface.

How to Plan A Destination Wedding: 11 Tips to Consider