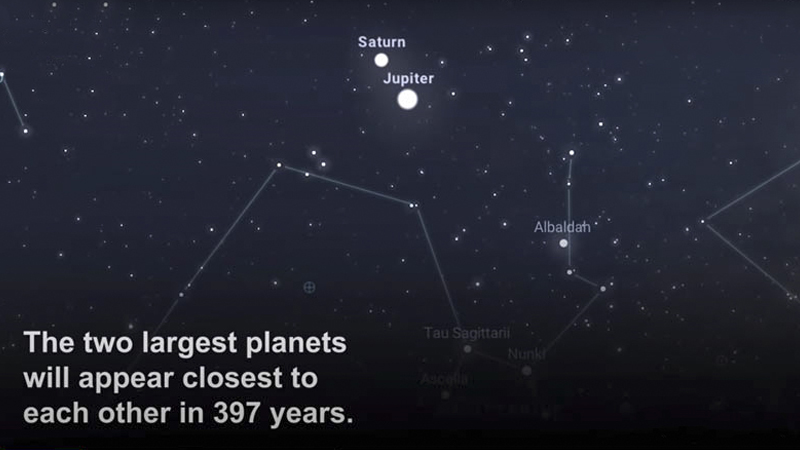 The rare phenomenon will occur on the winter solstice, Dec. 21 For the first time in 800 years, stargazers will be able to witness a spectacular “double planet.”

According to Popular Mechanics, Saturn and Jupiter will appear to be on top of each other in the western sky, creating what will look like a double planet on Dec. 21.

“Alignments between these two planets are rather rare, occurring once every 20 years or so, but this conjunction is exceptionally rare because of how close the planets will appear to one another,” Patrick Hartigan, professor of Physics and Astronomy at Rice University in Houston, Texas, told The Tribune.

“On the evening of closest approach on Dec. 21, they will look like a double planet, separated by only 1/5th the diameter of the full moon,” he added. “You’d have to go all the way back to just before dawn on March 4, 1226, to see a closer alignment between these objects visible in the night sky.”

To see the rare phenomenon, Hartigan writes on his website that you need to have good weather with a clear sky and “no low clouds in the distance.”

“Observers without a telescope may find it a challenge to resolve both planets, but it can be done. This is an event that could be impressive to see, but you will have to be prepared and binoculars will likely be very helpful for seeing it well in most skies,” he writes. “If you can set up a small telescope on them before it gets fully dark that will be optimal, as then you will be able to see both planets together in the field of view along with Saturn’s rings, and the brightest moons of both planets.”

If for some reason you miss the event on Dec. 21, Hartigan says not to fret.

The next conjunction of this kind won’t take place until March 15, 2080.