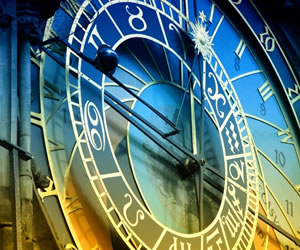 After the weekend’s New Moon in your work sector you’re able to move into the new week with a tailwind at your back and a new sense of resolve. However, with both the Moon and Mercury leaving your work sector on Friday this will see any intensity on the work front drop off and with Monday also Pluto’s last full day in retrograde motion in your career sector, this may see things slow down just when you’re ready to push forward. However, Pluto’s direct turn on Tuesday will bring a 5 month retrograde phase to an end, marking the start of a turnaround that will take until November to fully unfold. In the meantime, there is likely to be some professional and work/life balance tension this week, making it important to remain objective, refusing to sweat the small stuff.

There is no doubt that the pace has dropped off on the work front since Mars left last month, allowing Saturn and his long term focus to settle in and for you to get a chance to get your bearings. With Saturn due to wrap up his nearly 3 year visit in just a few weeks time, this has given you a chance to catch your breath before moving into the home straight, which you do this week. It’s the Moon and Mercury’s return to your work sector on Monday, within just a few hours of each other and in both cases teaming up with Saturn for the last time here for another 27 years, that brings a new sense of urgency. It’s the Moon’s intuition and Mercury’s intellectually savvy edge that gives you the resources to work smarter and also to take things more seriously, aware that it’s now game on.

Take heed of any work/life balance issues that surfaced over the weekend, for its left you with a sense of the importance of having the right priorities and boundaries. You’ll need this, because things are not only destined to become a lot busier over the coming weeks, you’ll get a much clearer sense this week of where you need to direct your time, energy and focus. While Mars has been in your work sector since late last month, as he moves into his final 3 weeks there is a new sense of urgency, but also a growing realisation that this is just a taste of things to come. The Moon’s return to your work sector on Wednesday and alignment with Mars on Thursday gives you one last chance to tap directly into Mars’ drives and passions and a hint at bigger developments just around the corner.

You will be familiar with work/life balance issues and challenges and probably have the bruises and scars to prove it, which is why old challenges returning could see you want to duck for cover, not wanting to venture into the water at all. It doesn’t help that in a standoff between home and professional forces that forces on the home and family front have the upper hand. Yet while Uranus, the only planet active in either of your professional houses is under siege in your career sector, this is more likely to work to your advantage. The Moon’s return to your work sector on Sunday will provide some very timely insights. This is the Moon’s last visit before Mars returns to your work sector and before next weekend’s Full Moon in your career sector, hinting at what lies ahead.

The South Node’s return to your career sector late last month brought you back to some of the conditions in play in the first half of the year, without the intensity, urgency or pressure. This is a more subtle force that is lending itself to some full circle moments, but in particular a chance to tap back into what motivated you in the early months of the year. At the same time, with Pluto in retrograde motion in your work sector since April this has put your entire professional focus onto the past. That all changes this week, on the work front anyway, with Pluto’s direct turn on Tuesday marking the end of a 5 month retrograde phase. While it will take until November to get things back up to speed and to working to full potential, this is the week when the tide turns on the work front.

At the same time that Jupiter, planet of luck and expansion is slowing down ahead of his retrograde turn in your career sector early next month, with professional forces becoming a lot less urgent and more about keeping things on track, things are moving into overdrive on the income front. It was always going to be the case that there is a strong partnership between forces on the income and professional fronts, until the end of November anyway, but this is the week that really becomes obvious. You’ll find that the professional urgency or need to break a sweat just isn’t there and as you start to appreciate that this is more about the long term than the short term, the focus shifts to taking your power back on the income front, making it a lot more about where the money is.

As you move into the new week you’re likely to feel a dramatic easing off in pressure and urgency on the professional front. By Monday it’s been 10 days since Venus left your career sector and with the Moon having already made his first visit since then, you’re left with your professional instincts chart and a clear sense of your overall professional desires, expectations and objectives, making it more now about walking the talk and staying on track. At the same time, after forces on the work front came under pressure from the Moon over the weekend, this is already settling down and with some wakeup calls under your belt, most work issues and matters are on the table as well. This allows you to put a lot more focus on your income situation, where there are real opportunities to be seized.

At the same time that there is likely to be some work pressure this week, this is being balanced by a strong sense of professional savvy and motivation. This allows you to turn what could have been a stressful week on the work front into an opportunity to become more motivated, ready to use this to your advantage and to gain some leverage. You have two layers of pressure, making it important to separate the two. Mid week Uranus, in retrograde motion in your work sector, will move into opposition with both the Moon and Mercury, creating more intense but also more temporary pressure, making it important to balance your time, energy and resources midweek. Underlying that is more subtle work pressure, that is more about raising the bar and making sure you’re not asleep at the wheel.

You’re moving into the new week with the tailwind from the weekend’s New Moon in your career sector at your back and as the Moon and Mercury both leave on Monday, with your professional instincts sharp and the intellectual savvy to seize the momentum this has created and turn it into a game plan. While the Moon and Mercury move on from your career sector in the early hours of the week, it was the part they played in Sunday’s New Moon that leaves you with a clear sense of resolve and momentum. The Sun will remain in your career sector until the end of the week and while he’ll leave it empty when he leaves there is no urgency to wrap things up or tie up loose ends, which won’t happen until Venus returns early next month. Until then it’s about getting the ball rolling in the right direction.

This is the week things get serious on the career front. It’s on Monday that first the Moon and then Mercury will return to your career sector, with your professional instincts and intellectual savvy kicking in at the same time. In both instances they’ll team up with Saturn for the last time for another 27 years and as this is the Moon’s last visit before then, as they align on Tuesday this will put your professional instincts and long term objectives on the same page. While you have until later in November to bring things home, with Saturn leaving on the 6th October you’re moving into the final phase of a chapter that began in October 2009. The Sun’s return on Sunday will provide the insight and clarity to see exactly what you’re working with and what is required of you.

With Venus gone from your work sector and the Moon’s visit last week having given you a chance to tie up loose ends your professional focus shifts to your career situation and matters this week. It’s the Moon’s return to your career sector from Wednesday to Friday and alignment with Mars, warrior planet of the cosmos on Thursday that makes these some of the most important professional days of the year to date, even though for the Moon this is simply a monthly visit and catch up. However, this is not only the Moon’s last visit to your career sector before Mars leaves, giving you a chance to put your professional instincts and passions on the same page, but the last before Saturn returns next month. This gives you your first real clues to the major events just around the corner.

You have a chance and a need to keep things on the down low this week, biding your time and keeping work matters in particular in their own little bubble. While there are outside pressures and tensions this week, especially on the money front, as Venus spends a fairly quiet week in your work sector she’s urging you to listen to your heart and if you can, focus more on the things you enjoy or at least getting a sense of what that is. The Moon’s return to your career sector on Friday and position here until Sunday will both sharpen your professional instincts and provide some surprise clues to just how close you are to a new professional chapter. For this is the Moon’s last visit to your career sector before Mars returns early next month, kicking off the 3 powerful professional months. – Freepsychicnetwork

Business Horoscope May 01 to May 07