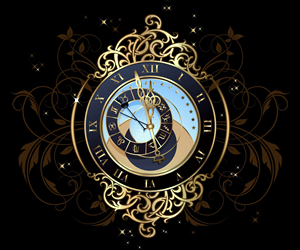 In the final days of your birthday month, which runs its course on Friday, you are likely to encounter a mixed bag, with the last 4 days likely to be a microcosm of the previous 4 weeks, giving you a crash course in everything you need to move into your new solar year with confidence. The week begins with the Sun under pressure from Saturn, creating the potential for both personal and/or relationship pressure. Yet that will ease on Tuesday just as Mercury returns to your sign, creating the potential for a communication or mental breakthrough. It’s the Moon’s return to your sign on Thursday, in the final hours of your birthday month and having come full circle from the New Moon at the very start that helps you to bring things home and put your new solar year on the most authentic track.

As you move into the new week you’re in the final days of your current solar year, in the process of closing old doors and making sense of where you’ve been. However, if it seems like you’re simply going through the motions it’s because for the most part this job has already been done. With Venus been and gone and Jupiter in your sign since last June, the future has been here in all but name for some time. It’s on Friday that your new solar year begins and as this coincides with Jupiter’s final months in your sign and when you’re in the final stage of building the foundations for this new 12 year Jupiter cycle, there’ll be a sense that you’ve made it. You’re more ready than you realise for the new doors that will open during Saturday’s New Moon and for what lies on the other side.

It may seem this week that you’re living two realities, one reality is trying to suggest and the one your heart is insisting on. As far as your heart is concerned this is already a time for new beginnings, for following your heart and for trusting in where it leads, with Venus having returned to your sign long before your new solar year even begins. Yet on Friday the Sun will begin the month long process of winding down your current solar year, putting your focus on the past. However this allows you to move through the process of winding down your current solar year aware of what you want and with full access to what the future holds. This allows you to narrow in on what doors you need to close and which you need to keep open, with a sense of what kind of future you’re packing for.

Despite the fact that this is an important professional week, especially on the career front but with a much clearer sense of your objectives and directions on the work front, you’re likely to find it much harder to remain motivated. Despite the fact that you’re not an overtly assertive or aggressive sign, you are in fact one of the most competitive and when the focus is on your professional game, which it is at the moment, you come into your own. Yet beneath it all you’re harbouring a secret and that secret is that you’re not sure if you can be bothered. All of a sudden sleeps ins, going with the flow and moments of sheer mindfulness, when everything but the present moment is blocked out, is far more enjoyable. You’re not losing your edge just finally learning to relax.

There is a lot of focus on your money and professional game this week and on both fronts a sense that the tide has turned and splits are developing. On the money front it’s time to finalise your financial game plan, while on the income front you’re just catching your second wind, with a comeback likely over the coming weeks. On the professional front a similar split is occurring, with a need to pull back and pace yourself on the work front, while you can expect new doors to begin opening on the career front, with the weekend’s New Moon in your career sector unlocking even more doors. Yet throughout it all runs a thread that makes it hard to take yourself too seriously, with a sense of adventure and a social and serendipitous vibe reminding you that it no longer needs to be all or nothing.

Despite the fact that your week is likely to begin with some financial pressure tension, this is both short lived and is more likely to work to your advantage, providing some timely wake up calls and bringing things to a head on both fronts. On the income front you need that wake up call, especially as you’re making your way in the early weeks of a powerful new career chapter, that after a bumpy start is finding its stride this week. On the financial front as a whole, this gives you a chance to take your power back, with a smart head and a nose for money kicking in as the week progresses. Yet as the week progresses you’ll become more aware of the fact that the best things in life are free and that money can’t buy happiness. Focus less on things and more on experiences shared with others.

Having the Moon in a playful part of your chart in the early days of the week, when you’re tying up loose ends and transitioning out of an active 3 months on the work front and into maintenance mode makes it important to have the right balance between work and play. By Thursday the thrust to get your 2012 working year up to speed will be complete, allowing you to broaden your focus, especially if things have been a little too busy of late. It’s your relationships that benefit from Mercury’s return to your relationship sector on Tuesday and the Moon’s on Thursday, just as some personal and/or relationship pressure is likely to have peaked. This gives you a chance to focus on communication and authenticity, on both the personal and relationship fronts and especially where they come together.

This is the kind of week that could have you wishing you could clone yourself, wishing there was either more of you to go around or more time in order to do it all. Yet despite the fact that there may be some pressure at the start of the week and you may feel your resources are being stretched thin, you’ll find that your energy, motivation and your juggling skills all improve as the week progresses. For while this is a week where there is a lot on the go on the romantic, work, financial and relationship fronts, chances are all you really want to do is cruise a little, with time to at least smell the coffee from time to time. In fact, that’s exactly what you need to do. When anything gets too much step out of the room, literally or metaphorically and simply soak up the moment.

There is a battle being waged between personal and professional lives this week. It doesn’t help that nothing is clear cut and that there are defectors on all sides, with opportunities on both sides ebbing and flowing. Yet throughout it all the message from all the forces this week is that you can have it all. It was Mars’ direct turn in your career sector last week that kicked off a professional comeback, but it’s the Sun’s return to your work sector on Friday and a New Moon on Saturday that gives this some real wings. However, with Venus in your relationship sector, the Sun in your romantic sector until Friday and Mercury returning on Tuesday to take over from where he’ll leave off, this is also an auspicious week on the personal front. You can have it all if you think you can.

With Saturn in your career sector and Venus in your work sector, unlocking the doors to some of the luckiest and expansive months on the work front in at least a decade, there is no danger that you’ll lose your professional momentum any time soon nor that this will be an overly professionally dominated week. Over the coming months this will become more an ‘all or nothing’ game, but that’s not the case now. With a lot of focus on your home and family situation this week and some major developments on the romantic and creative fronts, finding a balance between work and play is a must. The most satisfying pursuits will be those that allow you to work on creative endeavours, putting the elements of fun and work onto the same page rather than simply having them balanced in your life.

While there may be some communication challenges at the start of the week, the scene is set for a breakthrough, with communication not only becoming easier as the week progresses, but will benefit from anything that raises the bar and challenges your excuses. Mercury’s return to your communication sector on Tuesday will create a turnaround, giving you the mental clarity and articulation you need. This is also a week for tying up loose ends on the income front and putting things on the right track and there are also some new beginnings on the home front. It’s the Sun’s return to your home and family sector on Friday, where he’ll team up with lucky Jupiter for the first time since 2000 and a New Moon on Saturday that opens the door to some special weeks on the home front.

Be wary of first impressions at the start of the week or seeing conditions in the early days as an indication of what to expect. For as you move into the new week you’ll be met by a wall of financial pressure, caused by the fact that the Sun’s final days in your income sector put him head to head with Saturn in your financial sector, where he’s bringing up old financial issues. Yet despite first impressions this is likely to be a breakthrough week, especially on the income front with a smart head and a nose for money, along with a new sense of resolve kicking in. From this will come a new sense of professional confidence. This is also an important week for communication across the board with something special developing on the home front, especially from Friday onwards. – freepsychicnetwork

5 Things You Should Know About Women