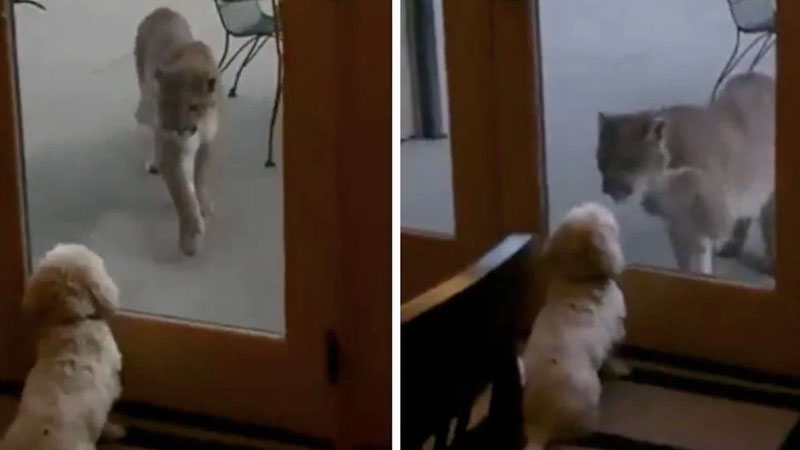 Most of us spend our lives realizing that nature has a certain order to it. There are prey and predators, and some predators, such as big cats in the wild, sit at the top of the chain, feared by all.

So it’s natural to be concerned when a big honking mountain lion, also known as a cougar or a puma, shows up on your property—especially if you have pets who spend time outside. Even with a thick pane of glass between them and the big kitty, most people would start sweating if a cougar showed up at their door. Most animals would, too, if they realized what they were looking at was dangerous.

Dash, the tiny doggo, is not like most animals.

Dash is delighting the public with his reaction to a mountain lion that recently paid a visit to his house in Colorado. Dash sits right up against the glass door, cool as a cucumber, as the cougar approaches in a video shared by Sarah Bole on Facebook and then reshared on Twitter. Even when the lion taps the glass with its mighty paw, Dash stands firm and unfazed. While you can hear his human panic in his voice, Dash just sits there wagging his tail.

Is Dash a brave badass? Is he lonely, and did he think he’d made a new friend? Is he terrified on the inside but acting coolly to protect his castle? Who can say?

There’s so much to love about this place. It’s called a tail wag. And the cat’s casual stare as it approaches. Then there’s the “I’m not looking at you, I’m just staring out the window” line. Then there was the barking and growling that came only after the cougar had walked away. Totally hilarious.

Dash is a true hero. Dash just exuded calm confidence that that cougar was not going to get him. His human kept telling him to return, but he was having none of it. He almost sounds like he’s saying, “Shush, human! I’ve got this.”

Dash, you’ve got this. Clearly. That cougar had no idea what to do with you. If you can’t beat a predator, you can fool them into thinking you’re not prey, right?

(Also, let’s hope the owner had those door handles locked and is thinking about switching to a round doorknob instead.) The only real danger here would be if the kitty cat reached up and pulled down on the lever of the door handle (which domestic cats have been known to do.)

We just need to give the pups a neckerchief that says, “Dash doesn’t dash.”