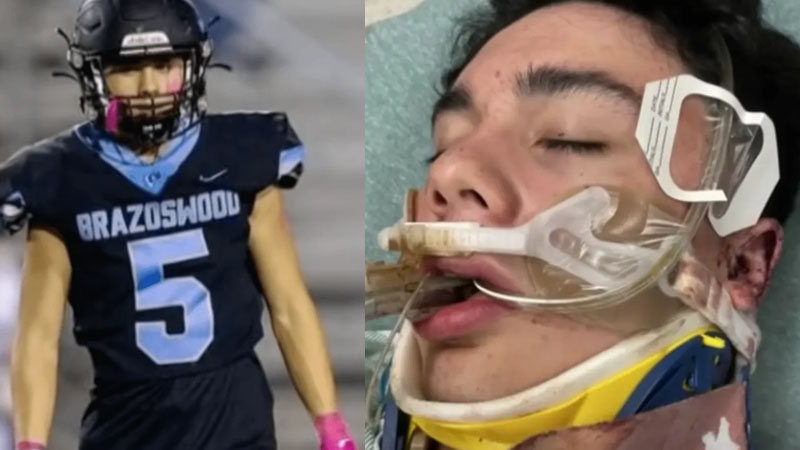 A Texas teen was hospitalized after being brutally beaten by his classmates in a “bizarre” and “heinous act,” according to his family. The attack, according to the classmates, was sparked by inappropriate behavior toward women in their circle.

According to a police affidavit, Cole Hagan, 16, was at a pool party in Lake Jackson, Texas on December 3 when a few of his Brazoswood High School fellow students informed him that his truck had been hit.

According to witness statements given to police, Hagan was ambushed outside by his varsity football teammate, 17-year-old Reid Mitchell, who had planned the attack for several days.

Logan Huber, another student accused of being involved in the attack, told police that he witnessed “Reid Mitchell punch (Cole Hagan), bear hug him, slam him to the ground and then get on top of him and elbow him in the face,” according to the affidavit.

“At this juncture, we believe the identity of all those involved has been established and other charges are pending,” according to a statement from the Lake Jackson Police Department. A spokesperson for the department told Insider that they could not provide additional details due to the active investigation.

Hagan was taken to Memorial Hermann Hospital in Houston after being assaulted. Hagan was placed on a ventilator after suffering multiple brain bleeds and skull fractures, as well as a broken collarbone.

When Hagan regained consciousness, he thought he had been in an accident, and the first thing he did was ask if his friends were okay, according to his 36-year-old brother Cory Hagan. Hagan was described by his brother as someone who “loves his friends” and “would do anything for them.”

“That right there killed me because that’s who he is, and that’s why it made this thing so heinous,” Hagan’s brother said. “They chose the weakest link. They chose the person that they had to lure outside to fight because he was not a kid that if you called him out, he was going to come out there and fight you in the yard.”

According to a spokesperson for the Justice of the Peace’s office, Holland is the only suspect who has retained a lawyer as of Wednesday. Mitchell’s parents did not respond to requests for comment from Insider.

“I’ve cried so much over the past week,” Hagan’s brother said. “Now, I’m focused on him getting better. I’m focused on doing our part to hold these people accountable.”

He claims there is a video of the assault and has offered a reward to whoever turns it over to the police. Hagan’s brother initially offered a $1,000 reward, but as more people offered to contribute to making it more lucrative, the reward has increased to about $25,000.

“I would be surprised if nothing was videoed, but if it was videoed, I think the only people that had it are the ones that could get in trouble if it aired,” Hagan’s brother said.

A build-up of animosity’

In his statement to police, Mitchell said there had been “a build-up of animosity” between himself and Hagan due to the Hagan’s “perceived behavior to some of their female acquaintances.”

Mitchell said Hagan had been “caught” with a friend’s girlfriend and “nothing happened,” but then “he went and did it again with Mitchell’s girlfriend.” At the party, Mitchell had been sent photos of his girlfriend with Hagan, according to his police statement. He said he then confronted Hagan and “told him that he hadn’t learned yet because he had done it so many times.” Then, he threw Hagan to the ground, hitting him multiple times, Mitchell told police.

After making their initial statements to police, Holland and Huber returned to the police department “to make a new statement due to leaving information out of their first statement,” police documents say.

Holland said Mitchell was upset because Hagan had been “messing with a friend’s girlfriend and then started texting with Mitchell’s girlfriend. Holland also mentioned a girl claiming that (Hagan) had sexually assaulted her,” according to the affidavit. Holland’s lawyer did not immediately respond to Insider’s request for comment.

Huber claimed in his second interview that Hagan was “acting inappropriately towards women, including Mitchell’s girlfriend, and his behavior even went as far as sexual assault on an unknown person.” The affidavit did not include any evidence supporting such claims. Due to the ongoing investigation, Lake Jackson police were unable to confirm whether they were investigating the claims.

Hagan’s brother charged the suspects with “just trying to pass the buck and avoid accountability” with their claims about inappropriate behavior, saying they are not “just repulsive, but more importantly, they’re false.”

“You’re making up lies about a good kid who was completely assaulted and taken off guard,” Hagan’s brother said. “Even if my brother had done that, which I can assure you he did not… Newsflash to Reid Mitchell – still against the law to do what he did.”

He added, “Cole is the most passive guy you’ll ever meet, even with girls, even in football.”

Hagan’s brother said he spoke with his brother’s friends about the incident and the claims made against Hagan.

“When I called his friends, (one of them) said it was consensual. They liked each other. They were talking to each other on Snapchat,” Cory said. “A boy’s dating a girl, they break up, the girl finds somebody else, they mess around or whatever, and the guy gets mad.”

A Brazoswood High School spokesperson did not respond to multiple requests for comment, but the school informed parents in a letter that the student who planned the attack “will not be on campus.”

“We expect our students, staff, and Brazoswood community to come together to help support the victim and family. Any retaliation or threats will not be tolerated, and students will be charged to the fullest extent of the law,” Brazoswood ISD said in a statement obtained by ABC 13.

“We haven’t received one apology from any of the parents or any of the young adults that were involved in it. There’s not been one ounce of remorse,” Hagan’s brother added.

An uncertain recovery and a derailed future

After a week in the intensive care unit, Hagan was moved to recovery, where his speech and mobility have improved. Nonetheless, his family is uncertain whether he will make a full recovery.

“After you have skull fractures like that, the last thing you need is to strap on a helmet and go bang your head into somebody else’s,” Hagan’s brother said. “He’s going to have to protect his head, which is heartbreaking. That was his number one passion.”

While he is grateful for the progress made in the investigation of his brother’s attack, Hagan’s brother and family’s primary focus is to help Hagan recover.

“Lake Jackson Police Department has already made three arrests,” he said. “We expect more arrests to be made. But things are moving in the right direction and we’re grateful for that. As upset as we have been about the attack on our family member, we’re equally as grateful for the progress he’s made and all the support.”

Hagan’s brother continued: “I’ve cried so much over the past week that it’s like … Now I’m focused on him getting better.”

Beloved family dog dies after fight with a porcupine in the backyard of New Jersey home: “He was trying to get them off his face”