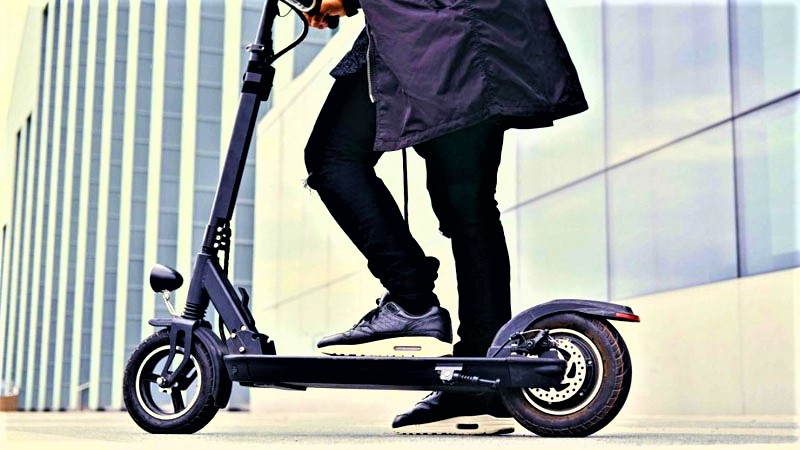 It is illegal to ride an e-scooter on a road, pavement, bus lane and bike lane.
People could be issued with a £300 fixed-penalty fine plus six points on their driving licence.
However, pilot schemes may mean they will become legal on the roads in future.

My thumb gently presses the handlebar throttle and the electric scooter I am wobbling on suddenly takes me on a high-speed slalom.

Weaving around pedestrians on a crowded high street, I ignore cries to slow down as well as a few chosen obscenities.

My adrenaline is pumping – I am engrossed in an exciting new game where humans have become skittles not to be knocked down. Welcome to the world of e-scooters, the latest travel craze to hit Great Britain.

I am motoring along at 15.5 miles per hour, the maximum speed permitted for the country’s army of 10,000 e-scooter addicts currently menacing town centres up and down the length of Britain.

Yet, like many novice scooter riders, I am not only a danger to pedestrians – but I am also breaking the law.

What most people do not know is that it is illegal to ride an e-scooter on a road, pavement, bus lane or even bike lane.

Pretty much anywhere in fact, unless you are trundling along in a designated ‘trial’ area and using an officially rented scooter.

In theory, the only legal option is to take your e-scooter on to private land with the owner’s permission.

But all this could change later this year when pilot schemes across Britain come to an end and a huge swarm of ‘legal’ e-scooters could start to spread across our land.

But in theory we could be issued with a £300 fixed-penalty fine plus six points on our driving licence.

Without a licence the fine is £1,000. If someone on an e-scooter knocks you over and they are uninsured, you pick up the cost of any injury. The same goes if an e-scooter damages your car. Fortunately, scooters rented out in trial areas must be insured.

The Department for Transport launched those initial 12-month trials last July, allowing people to drive a hired e-scooter on a road or cycle lane.

London boroughs including Westminster, Lambeth and Southwark are due to join the trial later this spring.

The hired e-scooters cannot be used on pavements. Most can be rented for a fixed fee of £1 plus 20p a minute with insurance included in the cost.

The insurance covers against theft, accidents and liability if you injure someone else or their property. You should have a full or provisional driving licence before using one.

As I soon discover, an e-scooter is a licence to menace others. Catherine O’Connor is out with her two-year-old son Dylan crossing a cobbled street in the Hertfordshire market town of Bishop’s Stortford when I weave my scooter out of their way to avoid an almighty crash.

She is singularly unimpressed. ‘You are riding like an idiot,’ she barks, ‘just like most of the others messing about on these scooters. You should be forced to wear a helmet and stick to the road and not be allowed on the pavement.’

She’s not finished. ‘It looks fun for you, but it won’t be for those you knock over. We need tougher policing to stop reckless riders like you causing carnage.’

In 2019, 35-year-old TV presenter Emily Hartridge was the country’s first e-scooter fatality when she was killed hitting a lorry. The coroner said her death was caused because her ‘scooter was being unsuitably driven’.

Other deaths are expected as e-scooters take off. Unlike with a car or motorbike, you do not need a full driving licence to ride an e-scooter – or take a one-day £100 basic training course as required for a 50cc moped rider.

The minimum age for riding a hired electric scooter is 16 and helmets are not mandatory, though encouraged. But you cannot take a passenger on the back – it is illegal.

On her lunch break as a GP at a local NHS surgery, Dr Feray Ozdes gives me a dirty look as I skirt swiftly around her on the pavement.

I may have felt in control on my £430 Xiaomi Pro 2 but she is not convinced.

She says: ‘I bought my partner one last June as a lockdown gift. Just like you, he treats it like a toy. Although it is useful for popping down to the shops, it is also dangerous.

‘So far no one has been to see me because of an accident caused by an electric scooter, but I am sure it is only a matter of time.’

Marta Pobiarzyn, 25, can see the environmental appeal and convenience of an e-scooter but she is not a fan. The marketing executive says: ‘What is wrong with your legs? Walking is a great way to exercise and a far less hazardous way to get around.’

Owners of e-scooters can buy their own cover from a specialist such as Cycleplan, YellowPlan or Laka, from about £7 a month. But until you can legally take your e-scooter on a public road you are probably wasting your money.

These all have a range of at least 20 miles before needing to be plugged into a standard electric socket for about five hours to be recharged. You should also budget £50 for a helmet.

Energy saving company SaveMoneyCutCarbon believes e-scooters could provide a great money-saving solution in the future – particularly if they help the environment by cutting gas-guzzling car usage.

Chief executive Mark Sait says: ‘We all need to think about going electric when travelling but not everyone can afford a Tesla. An e-scooter could provide an affordable first step for short journeys.’

Motoring bodies remain concerned about the safety of the scooters. Edmund King, president of the Automotive Association, says: ‘Optional training should be offered if electric scooters are rolled out nationally.

‘If wider use is legalised following the trials then issues such as the maximum speed limit and where they can be ridden must be included in legislation to ensure the rules are clear.’

On Friday, the Department for Transport said: ‘E-scooter trials will run until the end of November while we gather evidence on their safe use. Outside of the trial areas, e-scooters remain illegal unless ridden on private land with permission of the landowner.’

Take a Look inside Pamela Anderson’s Beachfront Home in Malibu, which just Hit the Market for $14.9 Million