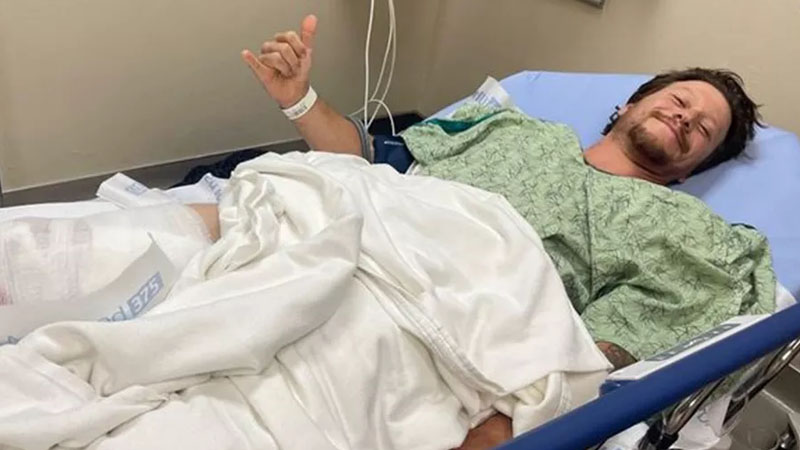 “Its lower jaws had the board and its upper jaws had my leg,” surfer Jared Trainor said of the shark attack that left him hospitalized with serious injuries

A shark attack has hospitalized a California surfer with serious injuries and a bitten board.

“I don’t remember the initial contact,” Jared Trainor, 31, told The Times-Standard of the attack, which occurred Oct. 2 at Centerville Beach, Calif. “It kind of happened so quickly.”

The experienced surfer confirmed the dangers of surfing in Northern California during “Sharktober,” when adult sharks return to the west coast.

“It did seem like there might be a little more seals than normal,” he said. “They were hanging out in the whitewash, which is pretty common for them anyways.”

As he paddled out on his board to where the waves were breaking, Trainor was suddenly pulled underwater by a shark. “Coffin style,” he said. “Its lower jaws had the board and its upper jaws had my leg.”

Trainor fought back, gripping the shark’s body with one hand and kicking its head with his free leg until the animal let him go, according to the Associated Press.

Trainor used another surfer’s phone to call for help after swimming back to shore.

According to the Associated Press, doctors used staples to close extensive wounds on his leg. The wounds were 19 inches long, the length of the shark’s mouth.

Following the attack, images of Trainor smiling in a hospital bed, bite marks on his surfboard, and his injuries were posted to Instagram.

“I’m grateful to be alive,” Trainor told the Times-Standard. “And I love surfing so much that I’m hoping this brings a newfound appreciation.”

Trainor faces a “long recovery” after being attacked by a great white shark, according to a GoFundMe page set up to help with his medical bills.

Instagram users posted encouraging words in the comments section of the post. “Rest up dude,” one person wrote, “you’ll be back in the water in no time”

“That’s gonna be a badass story & scar though, hope healing is a breeze mentally & physically! But pretty badass!!! You surfers are gnarly to go out there! My toddler is obsessed with sharks so we’ve been watching a lot of documentaries, powerful animals!” said another.

Trainor said he isn’t deterred by the attack. “I do have a flight to Hawaii in less than a month,” he said. “I was really hoping to surf there.”

He also stated that he wants his son to enjoy surfing as much as he does, despite the rare risk of shark attacks.

“I haven’t actually told my son directly that this happened,” said Trainor. “Because I hope that he’s not going to lose interest in the sport.”

Trump’s lawyers are turning on each other over Mar-a-Lago investigation: 2 dozen documents labeled as TOP SECRET