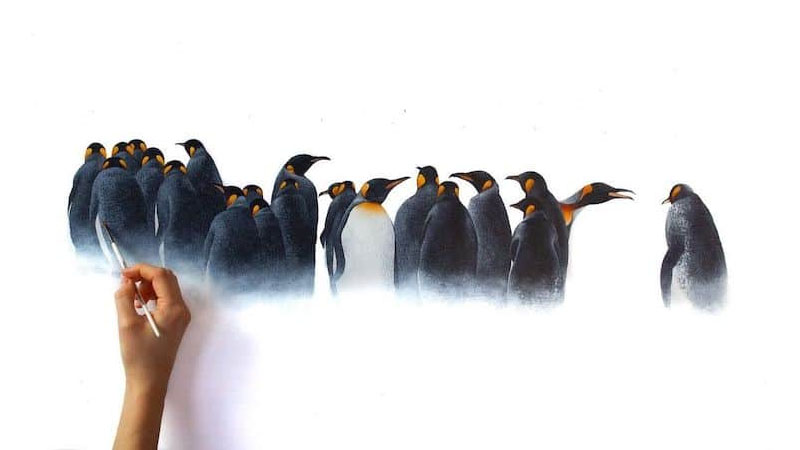 Penguins are loved by people all over the world. Many artists and creative projects have been inspired by these iconic animals, including the photo of the two widowed penguins and a series about life in Antarctica. In her acrylic painting, The March, the British artist Sophie Green, known for her hyper-realistic depictions of wildlife, captured a group of emperor penguins walking in a snowstorm.

This large, horizontal work perfectly captures the arduous life of Antarctic penguins. Its simple design draws attention to the complex rendering of each bird. Green’s efforts were praised, as this work was shortlisted for and received commendations for the David Shepherd Wildlife Foundation’s Wildlife Artist of the Year Award 2021. This piece was also featured on the cover of the Artists for Conservation exhibition book and got second in the BBC Wildlife magazine’s People’s Choice award.

It’s easy to see why this painting was a hit. Green’s masterful skills were put to use when she rendered a dozen penguins moving in a bent line. Each bird is covered up against a white background. Some of the subjects located further away are more immersed in the fog. The artist conveys the harsh conditions that these animals face on a daily basis in Antarctica by combining the figures with the wintery setting.

Visit the DSWF Wildlife Artist of the Year website for more information. You can also purchase prints of Green’s art from her online store, with a part of the profits profiting from wildlife conservation.