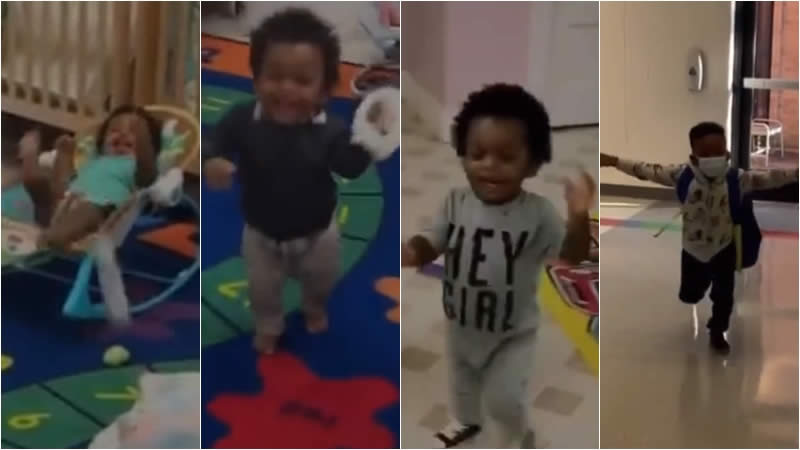 Nothing in this world is purer than the love between a child and a caring parent. This viral video, however, takes the cake even in the world of healthy relationships and strong family bonds.

Twitter user @TeesePeese shared a video of her son’s response to being picked up from daycare, and it’s seriously the sweetest thing ever.

“I really do love this video,” she wrote. “I recorded my son’s pick up almost every day and this is his reaction every single time. For his 5th bday (yesterday) I took my favorites and made a Lil compilation, from infancy to just last week.”

The squeals. The smiles. The joyous skipping. It doesn’t get any better than this.

Clearly, that’s a boy who adores his mother and exudes an endearing passion.

Some new parents worry that putting their child in daycare may harm their child’s attachment to them, but such fear is unwarranted, according to psychologist Noam Shpancer Ph.D., as long as the family environment at home is good.

“Available data indicate that, for most children, parental attachment processes are not disrupted by daycare participation,” writes Shpancer. “Home variables, such as maternal sensitivity, are the strongest predictors of parent-child attachment, even for daycare children.”

Unfortunately, good daycare can be prohibitively expensive, which is why the Build Back Better plan’s proposed affordable childcare features are so important. Millions of parents are forced to work to support their families, and middle-class American families spend an average of 14% of their income on childcare, which is double what the limit would be under the Build Back Better framework.

As per Upworthy, the benefits of stay-at-home motherhood vs. working motherhood have been debated for decades, but no one can disagree that high-quality, inexpensive childcare should be available to all parents, whether they want to work or are forced to work. I was able to and chose to stay at home with my children during their early years, but I would be pleased if my tax dollars were used to help all families get the support and childcare they require to make their individual situations work.

In any case, we adore witnessing children adoring their mothers, especially those with infectious grins and joyous squeals. @TeesePeese, thank you for capturing your adorable boy’s excitement and sharing it with the rest of us. You put a smile on so many people’s faces that needed it.

China Locks In More Than 30,000 Visitors inside Shanghai Disneyland after Covid-19 Scare on Halloween Night

Man shot and killed his pregnant, disabled wife after she caught him having an affair with woman overseas