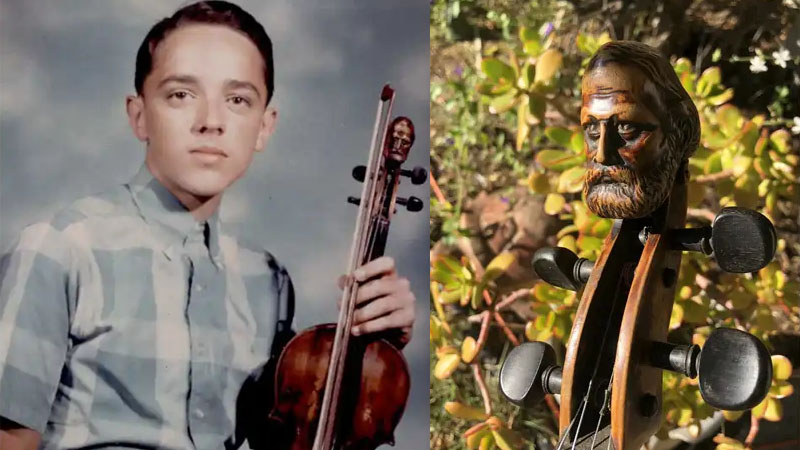 The violin belonged to the Davis family and was an heirloom. Local Davis, his wife, and their six-year-old daughter Emily were moving in 1986 and spent the night with relatives in Martinez, California.

Unfortunately, the family automobile was broken into during the night, containing many of the family’s goods, including the violin and numerous other instruments. Davis reported the theft to the police and filed an insurance claim, but he feared his instruments were lost forever.

Davis’ daughter Emily Davis-Gast, who was living in Los Angeles with her husband Gregory Gast at the time, came upon the unique violin for sale at Buy the Way Antiques 35 years later. She recognized the odd carving of a man’s head in the violin’s scroll from images of her father when he was younger.

She told Fox News that she forwarded the listing to her father, thinking it was for another instrument, only to have Davis respond, ‘That is mine!’ He could see all these little things in the sales photos, upgrades that he had made’, stated Davis-Gast.

The Davis family’s sole hope of recovering the violin was to contact the seller, as the original police record and insurance payout documentation had been destroyed over the years. Rachel Grimoldi, the owner of By the Way Antiques, bought the instrument during an estate sale. When approached by the Davis family, Grimoldi decided to sell the violin back to them for a fraction of its actual worth, only US$2500, to cover the fees she had incurred in purchasing it.

‘I resonated with the family’s story. We’ve had many invaluable and sentimental things stolen over the years’ she stated. Davis-Gast said she hopes to return the instrument to her father, who is based in St Louis, saying ’Sometime in the new year we’ll get a flight home – after making sure we can take it as a carry-on because ain’t no way I’m checking that thing!’