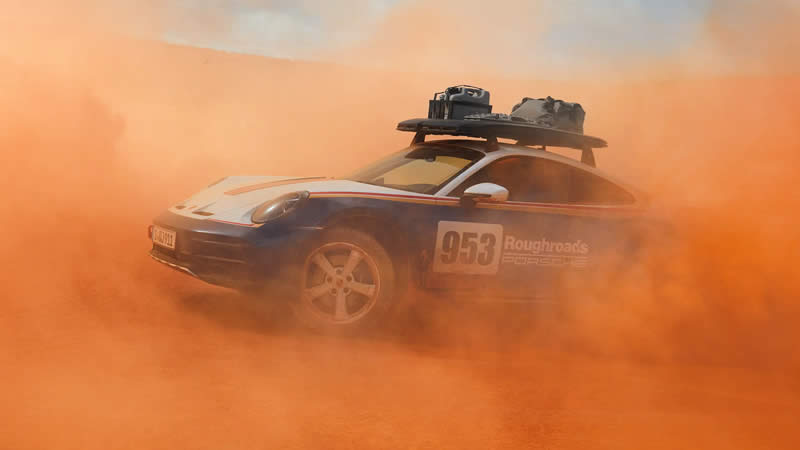 The Dakar Rally was never a game in a sandbox. Right from the start, it was one of the greatest adventures in the world and a challenging test of endurance. With the toughest drivers, the toughest vehicles, and a legendary winner in 1984: the 911 Carrera 3.2 4×4 Paris-Dakar (953).

The new Porsche 911 Dakar is a worthy successor. The Rallye Design Package pays homage to the original and brings history back to life.

On to the next stage

Performance, robust technology, and endurance are what count in rallying. Only then do you really have a chance of being the first to reach the finish line? The new 911 Dakar is a sports car that is just as suitable for off-road driving as it is for on-road performance and also cutting a fine figure in the city.

Whether on tarmac, gravel, or sand: the stiffer unit mounts of the 911 GT3 increase the driving dynamics of the 911 Dakar, especially when driving off-road. Together with the rear-axle steering and PDCC active roll stabilization, the result is an optimally tuned chassis package that masters even the most difficult rally passages safely and comfortably. The 911 Dakar produces 353 kW (480 PS) of power, which is transferred to all four wheels by the 8-speed Porsche Doppelkupplung (PDK).

The Rallye Sport Package offers enhanced protection for driving off-road and on circuits. It comes with two six-point seatbelts and a Black powder-coated steel roll bar that is bolted to the bodyshell behind the front seats. The package also includes an easily accessible fire extinguisher mounted on the passenger side.

Keep your distance. Not just at the front and the rear – but also underneath. The Dakar is the only 911 that has sports suspension to make it 50 mm higher than the standard 911. If space still gets tight under the stainless steel guard while on gravel roads, the 911 Dakar’s specially developed lift system can raise the car by a further 30 mm at the front and the rear – either when stationary or while driving at speeds of up to 150 km/h (93 mph).

A nod to the historic original: the two-tone paint finish in White/Gentian Blue Metallic, decorative stripes in Gold/Red, and 19/20-inch wheels painted in White with all-terrain tyres pay homage to the legendary 1984 Porsche 953. The starting number can be chosen individually.

This article originally appeared on Porsche and has been updated.

Attack on Nancy Pelosi’s husband is the culmination of longtime GOP hate-mongering: “Where is Nancy?”