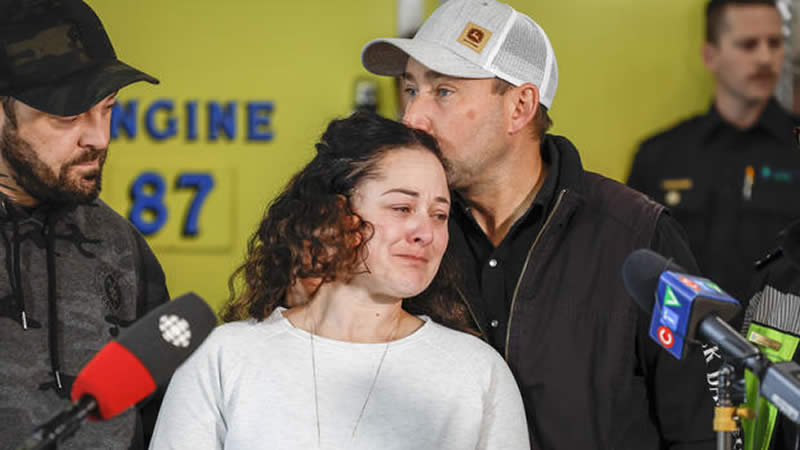 Jayme Erickson was the first person to arrive at the Nov. 15 collision north of Calgary, in which a passenger was trapped inside the car and suffered serious injuries. She then waited in the car and cared for the trapped woman until other medical personnel arrived.

Unfortunately, the paramedic was unaware that the passenger was her 17-year-old daughter Montana, who was unrecognizable due to the severity of her injuries.

“Jayme was unknowingly keeping her own baby alive,” said Richard Reed, a paramedic and Erickson friend, at a media briefing on Wednesday. He went on to state that Erickson administered the medical treatment to give the victim’s family time to say their final goodbyes.

It wasn’t until Erickson got home that she was confronted by Canadian police and the heartbreaking news that her daughter had died. “She was a fighter and she fought until the day that she died and she was beautiful,” Erickson said during the conference. “She was so beautiful. If she ever put an effort into anything she would always succeed at it.”

“We are overwhelmed with grief and absolutely gutted,” Erickson added on a GoFundMe page set up by family friend Lindsay Sandalack. “The pain I am feeling is like no pain I have ever felt, it is indescribable.”

“The critically injured patient I had just attended to, was my own flesh and blood. My only child. My mini-me. My daughter, Montana,” she continued. “Her injuries [sic] were so horrific I did not even recognize her. I was taken to FMC to see my baby girl, and was informed her injuries were not compatible with life.”

Erickson added that she “cannot help but be angry for the short time I was given with her.” Her emotional post questioned where Montana would be in adulthood — graduated, married, and living a happy life.

“I will cherish the memories we made and the time we had together,” she added. “I am shattered. I am broken. I am missing a piece of me. I am left to pick up the pieces and expected to carry on.”

At the time of publication, the GoFundMe campaign had nearly met its $100,000 target, which was meant to provide the family with financial stability as they grieved Montana’s death.