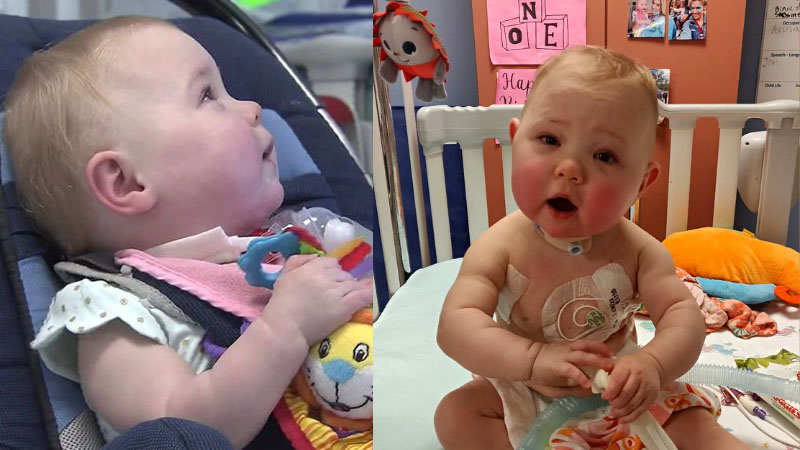 Premature newborns are more likely to have a variety of health issues, as well as a higher risk of death or major disability. While science is constantly improving and risks are now lower than in previous years, in certain circumstances doctors are simply unable to help, resulting in long-term disabilities or even death in babies.

Fortunately, everything went well for Bradi, who is now 19 months old, and she was finally discharged from the hospital a few days ago after spending her entire life in the hospital since her birth last August. Due to a pregnancy issue known as placental abruption, the infant was born at only 25 weeks into her mother’s pregnancy.

According to Action News 5, the Fosters’ last several months had been a tiring, long, and emotional roller coaster, but they were relieved to finally meet their fourth kid for the first time in their life. The Franciscan Children’s Hospital’s staff in Massachusetts gave the toddler a special send-off.

“All her doctors and her nurses and her respiratory therapist – everybody was there, blowing bubbles and cheering for her,” said Bradi’s mother, Darlene Foster. “The light at the end of the tunnel after 19 months.”

Bradi was born at barely 25 weeks, and during the next year and a half, she had a series of major health problems that necessitated ongoing medical care and treatment, as well as 24-hour monitoring. The baby underwent heart surgery and was placed on a ventilator and oxygen support at one point. Bradi was put on IV nutrition for several months as a result of her ordeal, but the therapy was stopped before she was released from the hospital.

Bradi is learning to eat pureed food, but she still has a gastrostomy tube. Foster may wear the tube around the house because it is tied to a specific animal-themed backpack. She will be sent home with an adaptable backpack provided by The Kid Fund, which is an employer-sponsored group at Franciscan Children’s, WCVB reported.

“There’s a little tube that goes to them, and it gives them full mobility so they can really experience what life at home is going to be like,” said Franciscan Children’s patient advocate Amanda Voysey, according to Newsweek.

She was discharged from the hospital and taken home last Monday after doctors decided she was strong enough to go home. The adorable child is preparing to start a new life at home with her parents, dog, and three older sisters, ages 6, 4, and 3.

“She’s just happy to be alive and happy to love everyone,” her mother said. “She has never met the dog, so that’s a big deal. She hasn’t seen her sisters since July, so this is a huge deal, that they finally get to see her.”

“She is finally here and just ready to live her life,” the mother said, according to the B. Herald.

Donald and Melania Trump’s Marriage: How Did They Stay Together for Over a Decade?