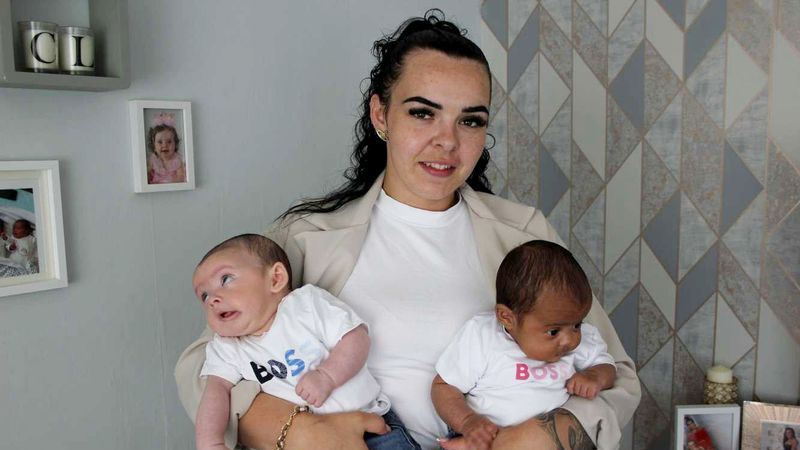 A mum says she’s regularly asked “are they both yours?” after she welcomed a unique set of twins with totally different skin colors into the world in April

A mother was stunned when the gorgeous twins she gave birth to revealed a significant difference.

Chantelle Broughton, 29, gave birth to son Ayon and daughter Azirah in Nottingham City Hospital in April, but the two had quite different skin tones.

In sharp contrast to her brother, Ayon has green eyes and light skin, whereas Azirah has brown eyes and a dark complexion.

According to genetic scientists, these kinds of rare births occur once in a million.

Chantelle and her father, Ashton, are both mixed race; Chantelle, who has a fair complexion, has a black Nigerian maternal grandfather, and Ashton, who is also 29, is half Jamaican and half Scottish.

The mother of three stated the twins didn’t appear very different at birth but had become completely unique in the last four months, with Azirah’s complexion getting darker as the weeks passed, according to Dailystar.

In addition to their different appearances, Chantelle said the four-month-old twins now have “totally opposite” personalities.

Chantelle, from Nottingham, said: “I’m so glad they came out the way they are – our own unique little family.

“Azirah was slightly darker at birth but you couldn’t really tell. Now as weeks have gone on she has gotten to the point where she’s darker than her dad.

“Every few weeks, friends and family still say they can’t believe it.

“Azirah is really laid back and chilled, whereas Ayon wants a lot more attention. He always wants to be rocked and is constantly babbling along. Azirah doesn’t do that very often.

“But I have noticed they are really staring at each other now and smiling more. I think they will stay like this. I think their hair will be different too.

“Azirah will have thick and curly hair and Ayon’s will be completely different. You can already feel the difference in texture.”

Chantelle claims the twins draw people’s attention while they’re out and about, and she even joked that passers-by might think they had separate dads.

She added: “When you’ve got a twin pushchair people to seem to notice you more anyway. I think people are gonna think I’ve had two different kids with two different dads.

“They do a double take and comment on how unusual it is. People just stop and say ‘Oh my god. They just look totally different. I’ve had people ask ‘are they both yours?’

“A lot of elderly ladies stop me and tell me how beautiful it is.

“A lot of the time people don’t want to mention it but when we tell them they say it’s crazy as you don’t see it very often.

“I wouldn’t have it any other way though, it’s certainly unique.”

Liz Cheney is ‘disgusted’ that the names of FBI agents involved in the Mar-a-Lago raid were released, and accuses Republicans of ‘dangerous hypocrisy’

Prince Harry, Meghan to steal the spotlight from Princess Anne amid UK trip