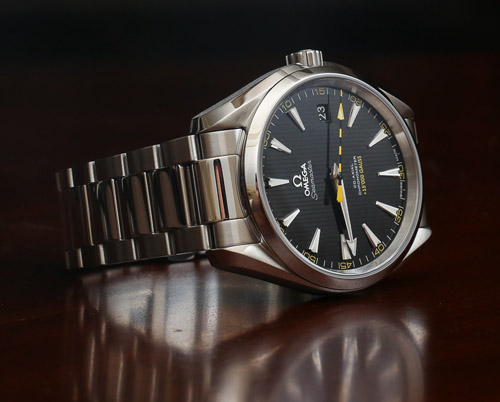 It would be safe to surmise that Omega was the star of the Swatch Group last year in 2013. 2014 and beyond are looking pretty bright as well, but what we can say safely say is that Omega has done a good job of recognizing and celebrating its past, while also firmly looking into the future.

A watch like the Sea master Aqua Terra > 15,000 Gauss is really about both of those perspectives. In reviewing it, we find a solid classic Omega Seamaster timepiece with a heart that literally dictates a guaranteed future of the brand. Let’s take a closer look at one of the most anticlimactic mechanical watches around. Also released last year in 2013, was the Omega Seamaster Speed master Dark Side Of The Moon (reviewed here). I bring this piece up for two reasons. First, is that the popularity and hype of the Dark Side Of The Moon just narrowly edged out the 15,000 Gauss in regard to consumer and media attention.

Omega Seamaster was certainly aware that this was going to happen when they released them during the same year. The second reason I bring it up, is because even though ceramic (the case material of the Speed master Dark Side Of The Moon) is not magnetic, Omega Seamaster did something totally different with the 15,000 Gauss in regard to tackling the issue of fending off magnetism. Let’s back up a moment. Why all the fuss about magnetism? Well mechanical watch movements are traditionally made of mostly metal, most of which is ferrous metal. That means they are susceptible to magnetic fields–which are actually more prevalent than people think.

Magnetism can do two things to a watch movement, and both are things you want to avoid. Magnetism can first act to completely screw up the accuracy of a movement because the balance wheel is being effected by the force, ruining its operation. This means that interaction with magnetic fields can make the accuracy of a mechanical movement all but useless. Second, magnetic fields can cause the metal in your watch to become magnetized. This will destroy your watch movement until a watchmaker can demagnetize it (if even possible in the situation). As you can see, avoiding magnetism when it comes to a mechanical watch is usually a good idea.

Normal mechanical watches are somewhat anti-magnetic, but not much. They can resist up to maybe 90 Gauss. Traditional anti-magnetic watches contain an iron shield around the movement to protect against magnetic fields. These protect up to about 1,000 Gauss, which is pretty good, but does prevent a watch that offers a view of the movement. It is unclear when or how most people would come into contact with stronger magnetic fields unless they worked around an MRI machine or in some type of aviation or industrial capacity, but it could happen. In any event, Omega Seamaster sought out to beat all records by producing a watch movement capable of withstanding up to about 15,000 Gauss, and offering a display case back to view the movement. -Ablogtowatch