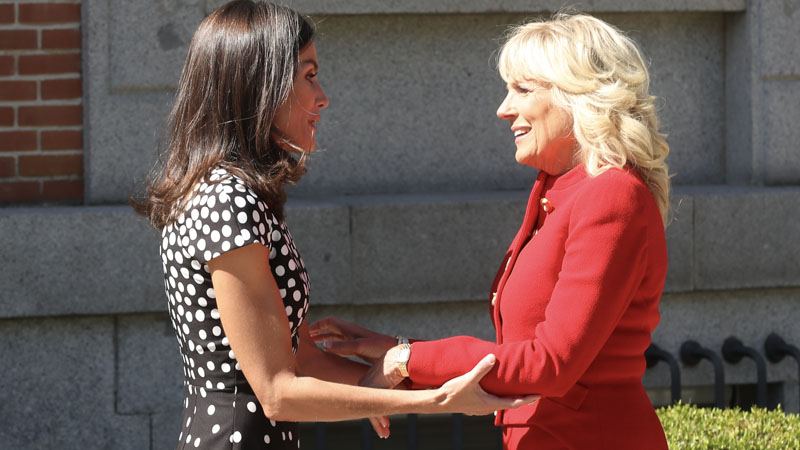 The first lady of the United States, Jill Biden, met this Monday in Madrid with Queen Letizia

Jill Biden, the first lady of the United States, met Queen Letizia on Monday in Madrid. Since the start of her reign, Doa Letizia has known three first ladies. The US president’s wife arrived in the nation’s capital two days before her husband, who is in Germany for the G-7 summit. Following their meeting at the Palacio de la Zarzuela, Jill Biden and Doa Letizia will travel together to the Madrid office of the Spanish Association Against Cancer (AECC), as the Larazon reported.

The Queen has met three American “ladies,” including Jill Biden. She had previously met Melania Trump and Michelle Obama. According to Doa Letizia, she was more complicit with the first than the second, according to the images that both starred in.

In 2010, Doa Letizia and Michelle Obama had their first meeting. The Head of State at the time was represented by Don Juan Carlos and Doa Sofa, who welcomed Michelle Obama to the Marivent Palace along with the Princess of Asturias at the time. He was asked to lunch in private and came from Malaga with his daughter Sasha.

Five years later, in 2015, they would meet up once more during the King and Queen’s official visit to the White House. In 2009, shortly after moving into the White House, Obama created an organic garden there. As a supporter of good food, an interest he shares with the queen, Special Ambassador for Nutrition of the Food and Agriculture Organization of the United Nations (FAO).

The following year, Michelle Obama and her kids would travel to Madrid with one purpose in mind: to meet with Queen Letizia about her Let Girls Learn Initiative, an initiative that supports schooling around the world. Before attending a conference in the capital, the Queen welcomed him at the Palacio de Zarzuela and escorted him around the house’s gardens.

During his second trip to the White House of the Kings in 2018, he met with Donald Trump’s wife, Melania, a Republican. The photos that came out of that encounter showed how friendly the two were; after standing with smiles outside the presidential house, they went to the red room to have tea and chat.

The Queen will participate in a number of events alongside the current first lady, Jill Biden, as part of the NATO Summit in Madrid on June 29 and 30, which will also mark the 40th anniversary of Spain’s joining the North Atlantic Treaty Organization. Nearly 40 heads of state and government are expected to attend.

In the Madrid town of Pozuelo de Alarcón, one of the four able to receive those fleeing the Russian invasion of Ukraine, Joe Biden’s wife, and Queen Letizia will visit a facility for Ukrainian refugees tomorrow and maintain a meeting with families.

He will join Joe Biden at a dinner provided by King Felipe and Queen Letizia in the evening for heads of state, government, and international organization leaders invited to the NATO summit. The US first lady will also attend a portion of the program for the spouses of the leaders attending the NATO summit in Madrid on Wednesday, June 29. There will be other encounters that will leave behind pictures that will allow us to understand how complicit the two are.